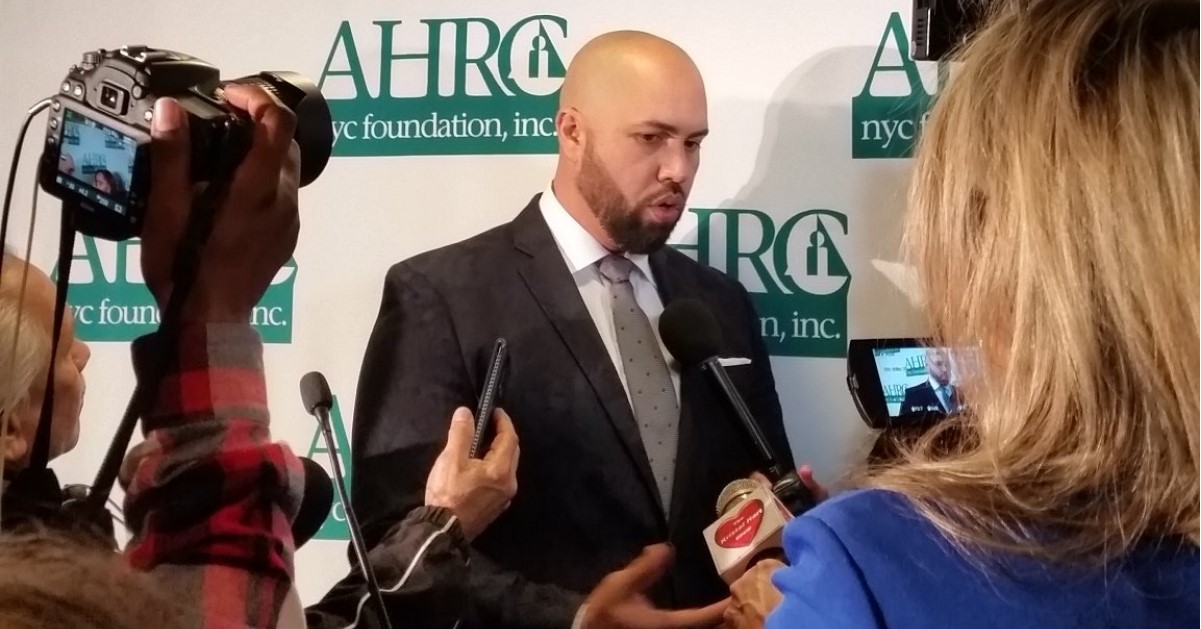 What: Jorge Posada, Carlos Beltran, and T.J. Rivera were honored at Tuesday night’s Thurman Munson Awards Dinner in New York, highlighting the baseball brand in a multicultural market.
Why it matters: The selection of three top Puerto Rican athletes for this prestigious honor is a testament to the power of Hispanic stars across all lines, in the sport and in cause-marketing efforts.

There they were at the Grand Hyatt Hotel Tuesday night in New York: three great ambassadors of baseball together for a key cause. They were conversing with a throng of media members in both English and Spanish and flowing back and forth between the two languages and cultures with ease.

Yankees great Jorge Posada; former Mets, and Yankees outfielder and Houston Astros World Series champion Carlos Beltran (@carlosbeltran15); as well as New York Mets infielder and Bronx product T.J. Rivera (@TJ_Rivera_); were honored at the 38th Annual Thurman Munson Awards Dinner to benefit AHRC New York City Foundation. The organization assists children and adults with intellectual and developmental disabilities. However, what they all really represented (all with Puerto Rican ties), was the great value that exists for baseball as a brand to seamlessly connect Anglo and Latino cultures in the biggest markets in North America.

“We are proud of our heritage and of the sport we played, and there is nothing more important than being an example for the next generation, whether that is in business or baseball,” Beltran said before the dinner, which was emceed by New York Yankees announcer Michael Kay. “Baseball is a business that crosses cultures better than any other. It has really helped the people of Puerto Rico unite with the ongoing issues there. We see what great power it has to bring out the best in everyone. It’s much more than a game to us, no matter where our fans are from.”

The universal language of cause marketing is also key for both the Latino and English speaking audience as well. That cause-and-effect was not lost on all those in attendance for the Munson dinner.

The power to unite

That power to unite and build is also not lost on another influential figure in attendance, said longtime New York Yankees advisor, media member and award-winning author Ray Negron. Negron, who has the unique distinction of hosting a talk show in both English and Spanish in New York each week on ESPN Deportes (the only show of its kind in the U.S.), has worked for years with Latino athletes and celebrities in finding a mix of cultures that translates to brand activation as well.

“We are seeing it more and more with crossover stars like Carlos and Jorge, and new faces like Carlos Correa and others. They are conversant in two cultures. That convergence is becoming more acceptable to brands who see ways to integrate into both a Latino and Anglo fan base more seamlessly,” Negron added. “I see it when brands come to our show. Brands like Verizon and Goya. They see the opportunity to reach a Latino base that loves the culture but speaks English as a first language. Sports, especially baseball, is the best entry point into that cross-culture now.”

The universal language of cause marketing is also key for both the Latino and English speaking audience as well. All those in attendance for the Munson dinner were aware of that cause-effect. Bringing brands together to work for a greater good also knows no language barrier.

“When disaster strikes and the stars turn out, there is no question what language they speak. It’s the language of love,” Negron added. “That’s what I think brands want as well. They want to see their names tied to social good. The athletes here tonight are all about the cause and doing what’s right to use their fame to help others. It’s quite a gift.”

Negron believes that that gift will continue to give as baseball becomes more engaged in multilingual brand pursuits. Meanwhile, brands continue to get more comfortable with unlocking the power of the Latino community through baseball.

“Baseball is a 24/7 sport. The continued influx of affluent Latinos to the United States, as well as the efforts made through social media to export the product of MLB to other areas of the Spanish speaking world, has a huge upside for brands that take the time to embrace the opportunity,” he added. “You see the star power that these veterans have, and their ability to make an impact for companies and for the community not in one but in two languages, so why not take advantage of it?”

A great question, and one that will continue to get our attention as we head toward Opening Day in March.