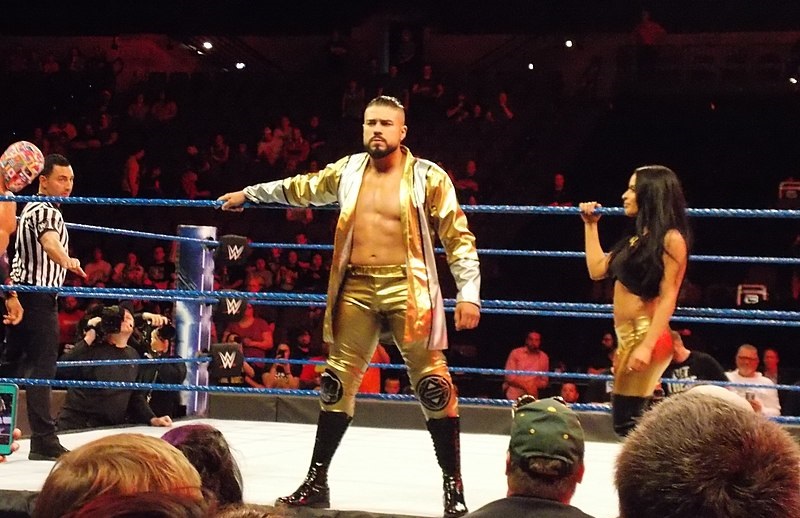 What: Andrade “Cien” Almas made his WWE pay-per-view debut during WWE’s SummerSlam weekend.
Why it matters: WWE covets the Hispanic wrestling market, and the sports entertainment company hopes Andrade “Cien” Almas can replicate the success he found in Mexico and Japan, growing their international fanbase.

SummerSlam is the company’s second biggest pay-per-view (PPV) of the year, behind Wrestlemania, showcasing the company’s best and brightest talent.

One of those stars, Andrade “Cien” Almas (@AndradeCienWWE), made his WWE PPV debut this year, defeating Rusev (@RusevBUL) and Lana (@LanaWWE) in a mixed tag team ma

tch. Almas, 28, is a rising star whose popularity is well established back in Mexico.  The WWE, who has long had a tradition of showcasing Hispanic wrestlers such Rey Mysterio Jr. (@reymysterio), as well as WWE Hall of Famers Pedro Morales, Tito Santana, and the late Eddie Guerrero, is hoping that Andrade can be the next WWE superstar that can help them continue to tap into the Spanish-speaking market.

“When you look upon the WWE roster, there isn’t anyone else who looks poised to break through as the next big Hispanic star for the company.  There are other talented Hispanic stars on their roster but I don’t currently get the impression WWE is using them with the goal of trying to cultivate their next big star out of them,” said Mike Johnson (@mikepwinsider) of PWInsider.com (@PWInsidercom). “With Almas however, there’s a ton of potential.  He has that necessary chip on his shoulder that radiates through the arenas when he’s performing. He has crisp timing that comes with being a great in-ring performer. He looks and carries himself like a star.”

Born in Durango, Mexico, “El Idolo,” as Almas is calling himself during his Smackdown run, is a third generation wrestler who followed on his grandfather’s (El Moro) and father’s (El Brillante) footsteps. Almas began his career at the age of 14, in his family’s wrestling promotion before signing with Consejo Mundial de Lucha Libre (@CMLL_OFICIAL), the oldest active professional wrestling promotion in the business, taking on the masked La Sombra persona, as his gimmick.

I wanted to be internationally known, and we all know that the WWE is that global company.

“My grandfather, my father, my uncles, a lot of people in my family are in wrestling,” said Almas to Mexico’s Sale El Sol morning show. “To me, it was just playing around. To do pro wrestling, to me, it was a kid’s game.”

While Almas / La Sombra started his career as a técnico (a “face” / hero), it was not until he turned rudo (a “heel” / villain), in 2014, establishing the Los Ingobernables stable that he became highly popular, both in Mexico and in Japan. With his star on the rise, in two different continents, Almas signed a development deal with WWE in 2015, hoping to become an even bigger international star.

“My dream, as a professional wrestler, I knew was not going to achieve more in Mexico,” said Almas to Mexico’s Sale El Sol morning show. “I wanted to be known worldwide, I wanted to be internationally known, and we all know that the WWE is that global company.”

After signing with WWE, Almas, wrestling without his La Sombra mask and under the “Cien” moniker, competed in the company’s NXT (@WWENXT) development league winning the NXT Championship after defeating Drew McIntyre (@DMcIntyreWWE), at the NXT TakeOver: WarGames show, in November 2017.

A key part of Almas success can be attributed to being paired up with Zelina Vega (@Zelina_VegaWWE). Billed as Almas’ business manager, the 27-year-old Puerto Rican from Queens, New York has become the mouthpiece and advocate for the Mexican luchador.

“La Muñeca” jumped into the wrestling business in order to honor her father, a telecom analyst for the firm Cantor Fitzgerald who died September 11, 2001, in the World Trade Center attacks, having competed in Impact Wrestling (@IMPACTWRESTLING) before joining the WWE.

“Zelina Vega is, in my opinion, an extremely unique, rare and special talent that only comes around so often in professional wrestling,” said Johnson. “She has an amazing personal backstory, having gotten into the industry to honor her father, who died on 9/11 as wrestling was one of the things that bonded them.  She has continuously improved on all levels and since coming to WWE, has found the perfect voice and characterization to make herself shine.”

Vega, who is bilingual, has helped Almas communicate with the WWE Universe, handling promo duties for Almas as he continues to learn English. Promos are the speeches that wrestlers deliver to audiences before and after matches, not only helping convey the talent’s storylines but also helping them develop a personality that draws the fans’ boos and cheers.

“Vega is so great in her current role, in fact, that from the second she and Almas were put together as an act on WWE NXT TV, he immediately meant more,” said Johnson. “Vega was the last piece of the puzzle Almas needed to go from being another WWE wrestler to a legitimate WWE act that mattered. I do believe knowing English can only help Almas as the company loves to have bilingual talents, but Vega does such an excellent job in her role that is helps maintain some of the mystique around the Andrade ‘Cien’ Almas persona.”

Whether competing as La Sombra or alongside Vega as Cien, whether rudo or técnico, whether competing in the United States or Japan, Almas always represents his Mexican roots to the fullest; something that draws sponsors to the charismatic luchador and the companies that employ him, looking to tap into the popular Hispanic wrestling market.

“There’s a ton of upward mobility for Almas,” said Johnson. “WWE has yet to scratch the surface with him on their Smackdown Live TV series.”