Sounding Off: Joe Kutchera, “The Million-Dollar Question: 4 Solutions on How to Grow E-Commerce in Latin America”

This article is part of a series of articles/interviews from the new book E-X-I-T-O: Su estrategia de marketing digital en 5 pasos.

Latin American retailers have historically struggled to bring buyers online because of inconsistencies in shipping and logistics, according to eMarketer. Customers oftentimes do not trust the postal service because it lacks consistency in service, or packages may never arrive. And FedEx and UPS are oftentimes prohibitively expensive.

As a result, service businesses such as airlines and movie theaters have historically dominated e-commerce in the region because they do not require any shipping. They can sell tickets directly to consumers through websites.

So, how can we resolve these obstacles in order to grow e-commerce sales?

1- Virtual Stores: Go to Where the Consumers Want to Shop (with Smart Phones)

If you want to grow your e-commerce revenues, approaching the problem digitally may not be the correct approach. Instead, put yourself in the shoes of your customers and brainstorm ideas that bring the digital shopping into the real world, with solutions that make your customers’ lives easier. Here’s one great example. 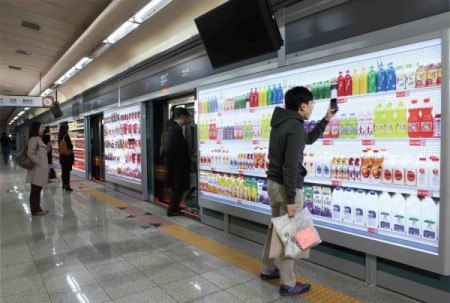 When the UK-based grocery chain Tesco wanted to expand its market share in South Korea, it came up with a brilliant idea. South Koreans work long hours and have little time to shop. The executives at Tesco developed a new and efficient way to sell its products that fit commuters’ lifestyle in the capital city of Seoul. The company’s Korean subsidiary, Home Plus, installed billboards in subway stations that mirrored the shelves in stores with the same products and layout. A QR, or Quick Response code, accompanied each product. Using these virtual displays, commuter-shoppers could scan the QR code of the products that they wanted to buy with their Homeplus mobile application and arrange for home delivery later that day. And so, in August 2011, the world’s first virtual store was born in the Seoul Subway. 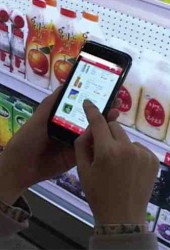 The results were phenomenal. Tesco Homeplus’ Smartphone application became the number 1 shopping application in Korea, with over 900,000 downloads since it launched in April 2011. People placed the majority of orders using this application on their way to and from work. It was most popular amongst 20 to 30 year olds, so the new stores will open close to a local university. The London Design Museum nominated Tesco’s Virtual Store for ‘Design of the Year’, as one of 2011’s best digital designs. The program was so successful that Tesco Homeplus expanded its virtual stores to more than 20 bus stops in South Korea, giving commuters the opportunity to do their grocery shopping ‘on the go.’

Watch this video of the retailer’s Virtual Subway Store in South Korea:

Henry Ford famously said about the advent of automobiles, “If I had asked people what they wanted, they would have said faster horses.”

We can say the same about e-commerce online. Consumers say they want more efficient and reliable shipping and logistics of durable goods. But perhaps, a new technology, that we do not even see yet, may enable the growth of e-commerce across the Americas.

One example could be the 3D printer. What if we could “print” children’s toys, a car part, or perhaps even artificial organs, all made from plastic. In an ideal world, people could buy an item on their smart phone, pick it up at their local store and bypass any shipping costs. These community hubs could collectively share the cost of such technology, utilizing shared CAD (Computer Animated Designs) and those local retailers wouldn’t need to carry any inventory, just download the design and “print” the product in-store.

Today, these machines cost approximately $2,000 USD each, from companies such as Formlabs and Makerbot. And they used to cost far more: tens of thousands of dollars. But as the technology improves, and competition increases, prices will fall just as PC’s and mobile phones have. Soon, 3D printers could be installed in neighborhood electronics or copy stores where these shared cell phones connected the townspeople to the outside world. 3D printers may very well be within reach in the not-too-distant future. And e-commerce “shipping” will never be the same.

Watch the video of the making of Formlabs’ 3D Printer

3 – Free shipping and cash on delivery

Linio hopes to change this by providing services that were previously unheard of: free shipping and accepting cash upon delivery. Ulrich Noel opened the company’s office in Mexico City in 2012 and hired 100 employees to launch its e-commerce website, according to CNNExpansion. Rocket, a privately held investment company based in Germany, owns Linio.com.mx and many other Internet businesses around the world. Some people criticize Rocket for blatantly “copying and improving” web business models while bringing them to new markets. The company has successfully copied eBay with Alando, Groupon with CityDeal and AirBnB with Wimdu, all in Germany. Now, the company has rolled out similar models in Mexico, establishing itself in Mexico City first as a launching pad for expanding into Latin America.

Amazon hopes to solve the all-too-common challenges of lost or stolen packages by installing large metal cabinets in convenience stores and drugstores that function like virtual doormen. These “Amazon Lockers” accept packages for customers who ship their items to a locker at one of a number of U.S. chains like 7-11. Once a package arrives to the locker, customers receive a code via email that unlocks the door containing their merchandise. Lockers only hold smaller items such as books, DVDs or electronic devices like phones or tablets and users have several days to retrieve their merchandise.

Even though Amazon pays a small fee each month to store owners where lockers reside, Amazon has reduced the hurdles that guaranteed delivery entails by making it easier for the customer to pick up the product. Many of these lockers are located in stores that remain open 24 hours a day. At the same time, Amazon saves on shipping costs by delivering many deliveries to one of these “Amazon Locker” locations all at the same time.

If implemented at universities and shopping centers, these lockers could resolve the challenges that Latin American e-commerce players currently face in convincing more buyers to shop online.