Check out  Portada’s Interactive Directory of Corporate Marketers and Agency Executives. 40 NEW LEADS HAVE JUST BEEN UPLOADED. To acquire the database, please call Matt Eberhardt at 347-961-9516 or e-mail him at matte@portada-online.com SEE A DEMO OF THE DIRECTORY!

Horizon will handle media buying for all Turner networks, including CNN, TNT, TBS, Cartoon Network and Turner Sports, among others. Incumbent MediaVest, which handled the account since 2010, was not invited to defend. Dennis Camlek, senior VP, Turner Media Group, and an agency veteran who worked at both Horizon and PHD, was involved in the decision to select Horizon. This is the second major piece of business that has shifted from Starcom MediaVest Group to Horizon this year, following Burger King’s $250 million account.

The retailer Kohl’s will introduce a new line of clothing for teen girls, developed in association with AwesomenessTV, a unit of DreamWorks Animation, which wants to branch out into the merchandising business. To promote the clothing, AwesomenessTV developed a scripted video series featuring two of its stars that will highlight the clothing. Kohl’s will buy ads on the channels and Awesomeness will get royalties on Kohl’s in-store sales of the clothing line.

Avocados from Mexico is releasing its 2014-15 retail promotional activity this Hispanic Heritage Month with “Échale al Asador” (Toss it on the Grill), a fully integrated program for Hispanic accounts. The program will feature a mobile sweepstakes and a coupon-recipe savings offer as well as digital, social media and in-store merchandising. This is the first Avocados From Mexico mobile program that will be targeted to Hispanic consumers. Consumers will be able to text to win to enter in the sweepstakes, access the coupon and grilling recipes from their mobile device.

For its fourth year as NCAA college football sponsor, Hyundai , is returning with an integrated campaign advertising the brand’s car lineup by an effort that focus around the 17 college football programs it sponsors through IMG College. The campaign comprises TV, print, radio, digital, and social media as well as YouTube and social food network Tastemade.The campaign was developed by via Innocean U.S.A, Hyundai’s agency of record.It includes a national TV spot and a number of regional ads to air in college markets where Hyundai-sponsored teams are located. The spots air during the 18 SEC on CBS national games. The regional team-sponsorship arrangement includes Tastemade making a 13-episode “Grill Iron” series on YouTube about each schools’ epicurean habits around football. At the end of the regular season, Hyundai will host a cookoff in Los Angeles with the season’s best chef selected by the viewing audience at Tastemade’s studio.

Starwood Hotels & Resorts is releasing a US $30 million advertising campaign to expand its Starwood Preferred Guest (SPG) loyalty program into the business-to-business market. The SPG Pro program builds on the company’s consumer-facing initiative that already skews towards tech-savvy members.Starwood’s digital media plan centers around the company’s first LinkedIn ad buy designed to attract business professionals on the social site. In addition to LinkedIn, Starwood is also buying promos on Facebook and will boost YouTube and Twitter content. Leading up to the program’s launch in October and throughout the year, Starwood will post new videos on YouTube that leverage all nine of the company’s hotel brands to show real customers’ stories.On Twitter, Starwood has started the new hashtag #spgpro to expand the Twitter and Instagram efforts for the consumer-facing program.The hotel chain claims that 50 percent of global bookings are made by SPG members.Starwood its counting on its sales team to pick top business customers to be the faces of the campaign across different categories.

Jack Daniel’s new digital campaign called “The Few and Far Between” centerpiece is a website that houses stories gathered from across the country that the brand refers to as tales of “mischief, revelry and whiskey.” The campaign has been developed by Arnold Worldwide and digital production company MediaMonks. The site captures 30 stories from New York City, Santa Monica, Calif., New Orleans and elsewhere using a variety of storytelling methods, including audio, video and the written word. Some of the stories involve Jack. The brand will promote the site with paid digital ads, including a partnership with Vice. A photo contest hosted on the Jack microsite asks viewers to submit photos under pre-written headlines. The winning image will be made into an ad featured in Vice.

GE will unveil a two-minute TV spot called “The Boy Who Beeps,” during the opening game of “NFL Thursday Night Football”, the introduction of its fall campaign for “Language of Industry.” The spot is being presented more of a film than as a commercial and is designed to show the evolution of GE’s two-year-old Industrial Internet business. In the spot, also created by BBDO New York, a baby is born and communicates by beeping. As the story unfolds, the boy grows up and learns how to manipulate machines with his beeps — changing the channel on the TV, moving toy cars, even changing traffic lights. GE will continue to use the two-minute format during other NFL games, NHL games and “Saturday Night Live. “It will also create a series of 30-second spots, print ads, content-marketing partnerships and social-media campaigns to tell the story of the Industrial Internet. The company declined to provide details on the campaign’s budget.

Rock Health, which provides funding for health-care technology start-ups, rolled out a new campaign to recruit tech-savvy entrepreneurs into the health-care field.The integrated campaign, created by BBDO San Francisco, uses emotional appeal to connect with digital entrepreneurs.The campaign, unveiled at the Health Innovation Summit in San Francisco Aug. 21, will move on to other health-care events and will be promoted online through social media and banner ads.In the ads, Rock Health uses iconic images from popular social media and digital companies , without directly naming these companies. 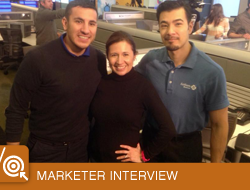 WellPoint’s Solomon Romano: “A marketer needs to understand the common values that unite most Hispanics”