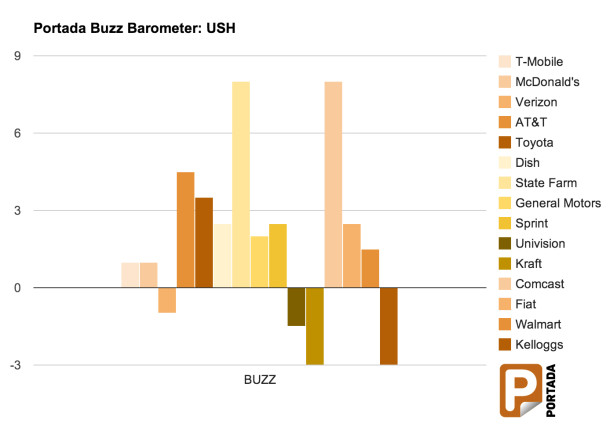 PR Experts and Marketers pay attention! We are Introducing the Portada Buzz Barometer. Each month we will be highlighting the companies among the main marketers targeting the U.S. Hispanic consumer which  make the most buzz.

In this edition of the Buzz Barometer, State Farm and Comcast are the advertisers with the most improvement in their own performance, each earning eight Buzz points. Also noteworthy among the 15 advertisers measured are AT&T and Toyota, each earning over three Buzz points. Kraft and Kellogg’s had negative Buzz, each of them registering a three- point Buzz drop.

Below are the Buzz scores for February for the top 15 advertisers in the U.S. Hispanic market:

State Farm’s increase seems to come from its plans – announced in February – to return to the Florida insurance market and its growth in Georgia, where the company announced it would be creating more than 3,000 new jobs. Comcast generated Buzz in February with its announcement of a joint service agreement with Netflix and its purchase of Time Warner Cable. Netflix may have had an influence on the uptick in AT&T’s Buzz. In February, there was a lot of noise about talks between AT&T and Netflix to accelerate service (similar to the Comcast agreement). For its part, Toyota introduced its Highlander SUV in February and celebrated a decade of entering NASCAR.

The Buzz is a number that can go from 0 to 100 and is measured by the Google Trends tool, which allows us to see the search trend of any term since 2004. A score of 100 denotes the moment when a term has generated the most searches to date since 2004. In some cases, the highest score is recorded in a distant year (such as General Motors, which achieved this score in 2005). In other cases, the highest score has been recorded recently (like Walmart in November 2013). What is important for our study are not the Google Trends scores, but the average changes (arc change) that each brand has achieved with respect to itself within a defined period (the month of the study) compared with the same period last year and the month immediately preceding the current one.

The list of advertisers for the US Hispanic market has been culled from several existing studies on the major advertisers for each of the markets studied. For technical reasons we have left out some advertisers whose names do not appear as a main part of their marketing materials, i.e.: those whose advertising is focused on selling its branded products, but not on generating buzz about their own name (such as P&G).

Below are the figures obtained with this tool for the US Hispanic market, which were used to calculate the Buzz points on our barometer.