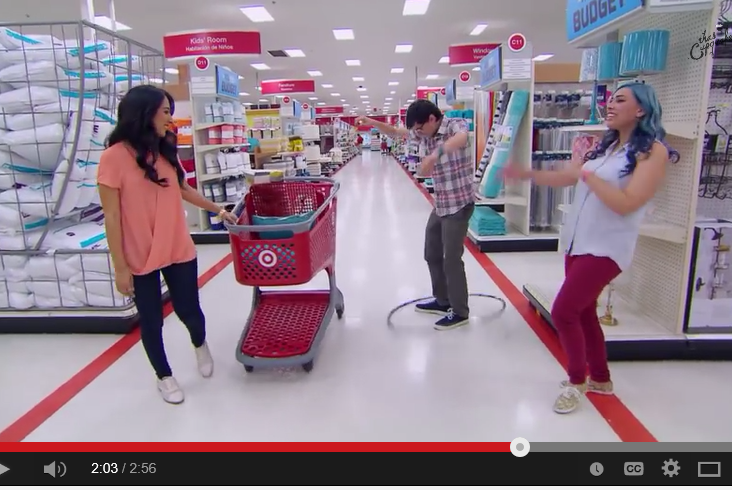 Hispanic YouTube stars come out of nowhere … Una chica makes some videos in her bedroom. Two years later, maybe she’s talking to 15 other kids – or maybe she has 7.5 million subscribers to her YouTube channel.

The most high-profile of the latter is Bethany Mota, AKA Macbarbie07. Mota began producing “haul” videos in 2009, showing off new purchases. Her first video shows a shy, subdued tween sitting in an under-lit bedroom rambling on about some makeup she bought.

Fast forward to 2014, and Mota is on the cover of Fast Company and launching her own clothing line from Aeropostale, while flying around the world producing kicky videos about style and shopping – oh, and appearing on Dancing with the Stars.

There are plenty of Hispanic video stars, including Rosanne Pansino, Tiffany Garcia and Divino.

There will always be competition in launching new video destinations, but nothing of the scale that YouTube has achieved.

Why one blows up and another doesn’t is somewhat mysterious. For example, in her second-ever video, Mota gives a shout-out to a mentor, Blair Fowler, known on YouTube as juicystar07. Fowler began covering the style and beauty territory earlier than Mota, yet she’s coasted along at around 150,000 views per video. That’s nothing to sneeze at: Any brand would be happy with that many views of its video. But it can’t compare to the 5 to 8 million views Mota typically garners.

While YouTube provides information and tools for its creators to help them garner more views, some stars have an extra edge in the form of multi-channel networks, or MCNs. This confusing moniker refers to companies that act as talent agencies and ad-sales networks for video bloggers. Many of them also produce custom content for brands featuring the stars in their networks.

Omnia has a stable of video talent, including Hispanic stars Baby Rasta y Gringo, Divino and Garcia’s iHasCupquake. It aims to continue creating custom branded content employing the digital influencers within its MCN. Channel Factory has expertise in the granular targeting of specific audiences and optimizing videos for high clickthrough rates and ROI, according to Tamoor Shafi, CEO of Omnia Media.

“Our focus in the past two years has been working with top influencers. Sales and interest from brands has increased exponentially,” Shafi says. For example, it landed a deal with Target for four iHasCupquake episodes in which Garcia decorated dorm rooms.

Omnia helps video bloggers develop their audiences on YouTube and beyond. For example, EME Music, Baby Rasta y Gringo’s label, had only a small presence on YouTube, so Omnia helped it establish a few new channels and launch content, making use of its expertise about best practices on YouTube, such as the best time to upload, how to properly tag content and search engine optimization.

Divino’s channel had only 5,000 subscribers. When he launched two new songs, Omnia helped EME cross-promote them with strategies including targeted ad buys and placements in more popular playlists, as well as driving views through likes and favorites. The campaign bumped his subscriber numbers up to close to 40,000.

MiTú is another of the many MCNs that provide talent development services as well as opportunities for their stars to participate in sponsorship and ad opportunities. It provides them with an internal platform called MiTuVero.com that lets them check out branded opportunities they might want to participate in, as well as submit their own original content ideas. They can keep abreast of what other channels are doing and what’s working for them.

A lot of Hispanic talent creates content for a global audience.

Says Charlie Echeverry, MiTú’s chief revenue officer, “Analytics means more money and audience for these influencers. Every one of them wants to create new, bigger-budget things that can be upstreamed to other platforms.”

It’s interesting that many of these young online stars are not creating Hispanic-specific content, nor are their fan bases predominantly Hispanic. At the same time, non-Hispanic stars recognize the importance of the Hispanic audience. According to Shafi, Inna has a very large following in Mexico, and Omnia is helping her to optimize her video content to bring in more fans from Latin America. “A lot of Hispanic talent creates content for a global audience,” he says.

Next, Omnia Media plans to create branded mobile and web apps for its talent that will be used to deliver their content outside of YouTube. It’s also launched a new ecommerce initiative called iRockCustom.com to sell merchandise for its talent stable. It will design, produce and sell merchandise for its stars; each star will have a unique URL that he or she can market to their fans.

More and more of these young influencers are, with the help of their MCNs, trying to build a strong brand that’s less dependent on YouTube. That’s partly due to the fragmentation of video and the rising importance of sites including Vimeo, Vine, Twitter and Blip.tv.

But it’s also because YouTube takes, in most cases, a 45 percent cut of all ad revenue, although it reportedly is trying to do better in supporting its top stars. YouTube did not respond to several requests for an interview.

Fueling potential flight from YouTube is a series of acquisitions of MCNs by mainstream entertainment companies. For example, Maker Studios, recently acquired by Disney, likely hopes to move as much of its audience as it can off YouTube and onto Maker.tv, according to Iddo Shai, director of product marketing for Kaltura, an end-to-end, over-the-top video platform.

He points out that right now, it’s difficult for advertisers to do integrated campaigns that include YouTubers’ videos and other media, as well as to create the innovative campaigns that marketers crave.

“On YouTube at this time, that is very hard to do. There are some changes on YouTube, and maybe they will become more flexible in what they especially allow the upper talent to do. But they will never give full access — and rightfully so. They are a strong platform and want to control much of the revenue and the content,” Shai says.

But the MCNs are becoming strong in their own right. They have to race with YouTube to reserve advertising on their stars’ videos. Whoever reserves first gets the inventory, making it harder to plan and execute the larger campaigns that MCNs are increasingly angling for.

Omni’s contracts with talent usually include obtaining exclusive rights to selling their YouTube inventory – except, of course, for YouTube, which also can sell it. Some contracts include the exclusive right to sell brand content on their channels. While Omnia competes with YouTube to sell its stars regular inventory, Shai points out that there are a lot of cases where the companies collaborate, with YouTube handling the media side and Omnia selling the custom ad products.

Will these rising stars flee YouTube altogether? Not a chance, according to Shai. He says, “There will always be competition in launching new video destinations, but nothing of the scale that YouTube has achieved.”

Other articles on the emerging (Hispanic) online video media and marketing sector: MCNs in Hot Pursuit of Brands and Are Multichannel Networks the Future of TV?