News media in Spanish to serve the rapidly growing and economically robust Latino community with reliable information is essential to maintaining a strong democracy and building a fully inclusive society. In an era of widespread public distrust of institutions, El Tiempo Latino is committed to being a trustworthy institution that provides useful and timely information to Spanish speakers in the United States.

Government, in particular, has suffered a decline in trust. Today, fewer than 20% of Americans trust the government to “do the right thing always or most of the time,” compared to more than 70% during the era of Presidents Eisenhower and Kennedy. In more modern times, trust rose from 19% to 44% during the Clinton administration, and then peaked at 60% with President George W. Bush as the government responded to the Sept. 11, 2001 terrorist attack, according to Pew Research.

Latinos, however, have trust in their own futures in this country. Three-quarters are satisfied with their lives, and two thirds-think it is a great time to be a Latino in the United States.

This is a hard-working and resilient community. Latinos’ impact is also growing impressively. A range of metrics make clear that their presence is being felt across economics, demographics and policies.

Recent elections have highlighted a strong desire to connect with the Latino population as a political force. The Latino vote has the ability to influence the outcome of local, state and national elections. In the 2020 general election 16.5 million Latinos voted,  compared to 12.7 million four years earlier. Far more Latinos – 32 million — are eligible to vote, representing more than 13% of the country’s overall electorates. No one party can take them for granted. Several studies show that one third of the Hispanic population is uncertain about their political affiliation or identifies as independent.

As encouraging as the numbers may be, the Latino community still faces enormous challenges. Latinos earn 73 cents for every dollar earned by the non-Hispanic white American population. The percentage of Latino children in poverty in the U.S. is 1.5 times higher than the population as a whole. And, of particular relevance to the mission of El Tiempo Latino, our community is disproportionately subjected to false information and manipulation via social media and other means. 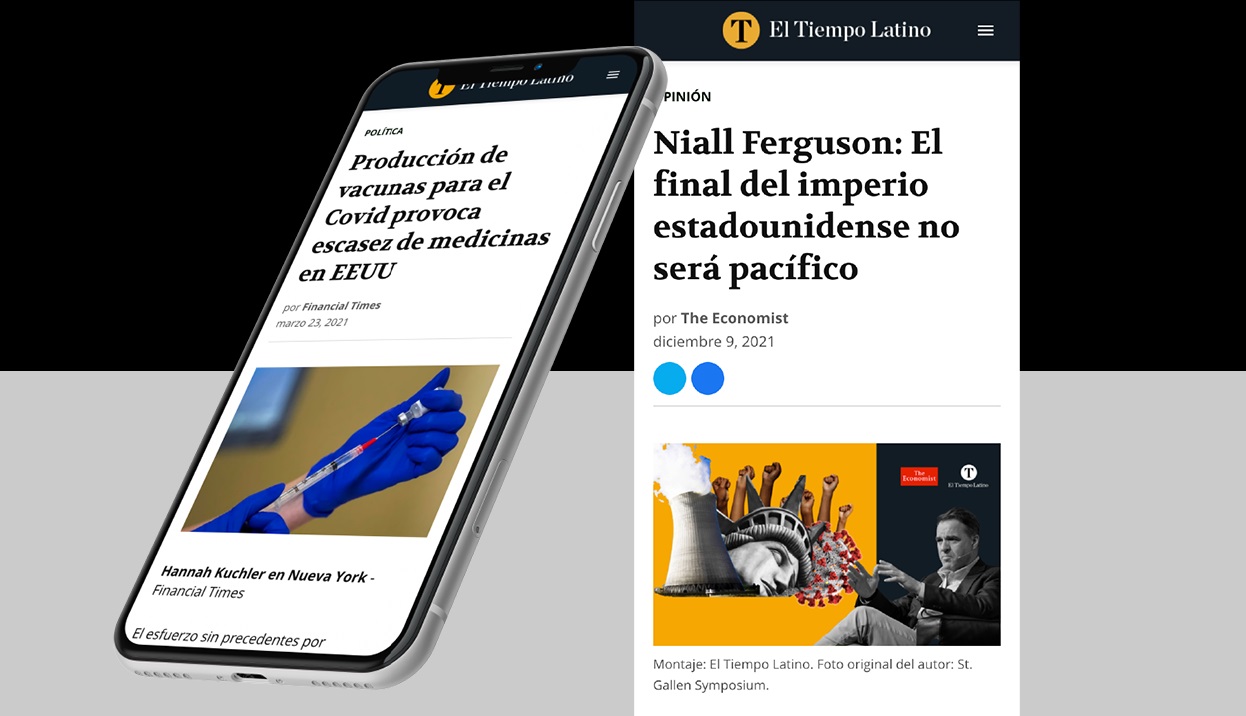 This context explains our own company’s deep sense of responsibility. We aim to provide our audience with the information, particularly through reliable news media in Spanish, they need to make good decisions and to help them feel included and empowered in this country. This year at El Tiempo Latino we are concentrating on two specific efforts.

To combat disinformation in Spanish in the run-up to the midterm elections in November 2022 and the general election in 2024, we rely on our own tested strategies for producing and distributing the most engaging political content. Our ambition is to be a clear and attractive channel in the midst of overwhelming noise.

To amplify the Latino voice, we are redoubling our efforts during Hispanic Heritage Month, serving as a platform for leaders and experts to discuss issues that are of vital importance to our community.

The entire United States will benefit from integrating the Latino community more completely into our society and, toward that end, facilitating access to valuable information in Spanish. The goal is to reduce political polarization, narrow the economic gap, motivate entrepreneurship, provide more work opportunities, celebrate a vibrant culture, protect public health and allow everyone to live their lives to the fullest.

Understanding and connecting with Latinos deserve to be a priority for government institutions and companies that seek the attention and dollars of the nation’s largest minority. At El Tiempo Latino, we are proud of our own efforts and seek to encourage continued progress.

If Latinos in the U.S. were a country, they would rank as the 7th largest economy in the world. Their GDP as a community is higher than that of France. Between 2010 and 2019, the Latino economy grew twice as fast (measured in real GDP) as the rest of the U.S. economy. As a community, our economy has grown faster than Canada, Germany and Great Britain, lagging only behind China and India.

In the past decade, the Latino population has grown 23%, more than three times the increase in the nation’s population as a whole. Contrary to what many people might suspect, this growth has not been driven by immigration. It is due instead to the 9.3 million babies born between 2010 and 2019 to families in our community. This growth makes us the largest minority in the country, with 18.7% of the total population.