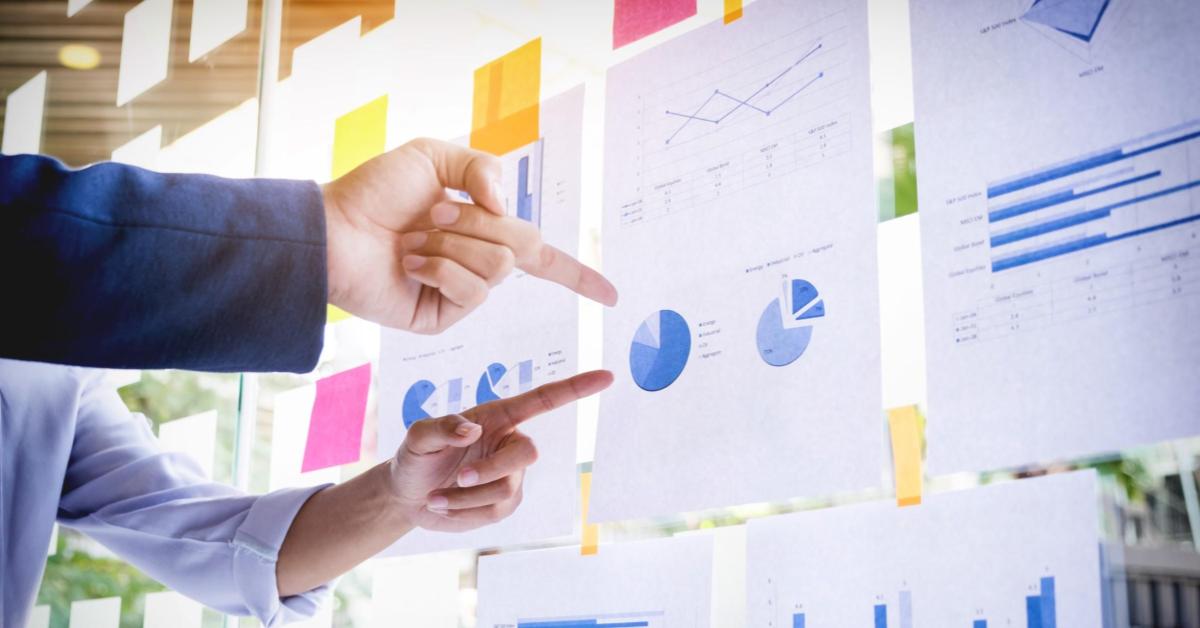 Desktop, Not Just Mobile, Key to Digital Growth in LATAM

What: According to comScore’s Digital Future 2017 report, Latin America’s desktop audience is now as large as that of the United States, at 196 million users. And while the use of desktop has decreased by 1.1% globally (and by 5.2% in North America) since last year, in Latin America, it grew by 0.5%.
Why It Matters: Simply creating desktop campaigns for the region is not enough: This large audience must be monetized through precise targeting that reflects the complexity of the region. Marketers must understand and appreciate that the content a Latin American user consumes — and the device he or she consumes it on — varies depending on geography, category, and other cultural variables.

According to comScore’s Digital Future 2017 report, Latin America has finally caught up to the United States in terms of desktop audiences. As of February of this year, the number of desktop users in Latin America had hit 196 million users.

Mexico is driving digital trends in the region: It is the country with the highest consumption of video in Latin America with users consuming about 280 minutes of video a month, followed by Chile with 270, and Argentina with 240. Consumption of mobile minutes in Mexico grew more than 400% between 2016 and 2017 alone.

But the region is as complex as it is large. Will marketers be able to adapt their strategies to the diverse and untraditional Internet consumption patterns observed among Latin American audiences?

Will Marketers Pay Attention to the Growth of Desktop in LatAm?

Nobody debates that mobile, which many major advertisers are prioritizing in order to reach the region’s many younger, mobile-only users, will play a vital role in shaping the future of the digital landscape.

But the data in comScore’s recent report sheds a light on an interesting phenomenon: Desktop is growing in Latin America, defying global trends and creating an interesting opportunity for marketers that pay attention. Desktop grew 0.5% in Latin America between June 2016 and 2017, while it went down 1.1% last year globally. In other countries, the move to mobile is even more pronounced: In the United States, desktop use has gone down a whopping 5.2% since last year.

As Latin American users incorporate digital products and devices into their daily routines, marketers that focus exclusively on mobile are missing a significant opportunity to speak to the particularities of the Latin American Internet user’s preferences, which appear to increasingly include desktop. 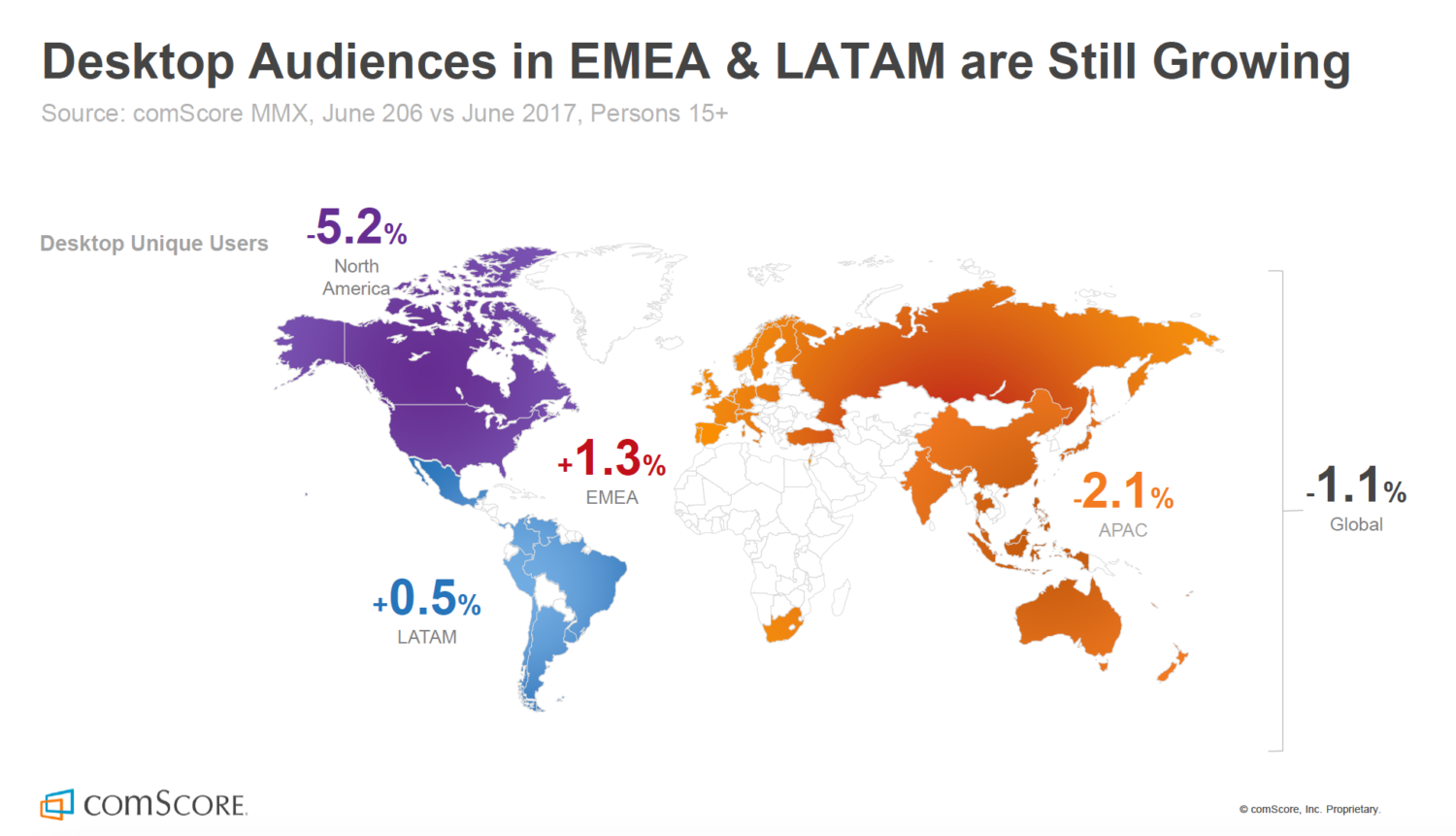 It’s not that mobile isn’t growing in the region. For example, 76% of Mexican digital users are now multi-platform or using mobile exclusively, and that number jumps to 93% among Millennial Mexican users.

But Rodrigo Cerón, Senior Manager of Corporate Marketing at comScore, warns that marketers may be focusing too heavily on mobile, commenting that “mobile is growing a lot in terms of advertising investments, even though desktop is still strong in terms of user preferences.”

“The most advisable thing is to mix the best of desktop with the effectiveness of mobile ads,” Cerón said. “The marvel that the Internet represents is exactly that.”

It is careless to generalize when discussing a region as heterogynous as Latin America in terms of Internet consumption patterns and rates of adoption of new technology and platforms.

Cerón commented that in Latin America, “there are different levels of maturity” when it comes to Internet use. He pointed to the monetization of video as an example. “We observe, for example, that there are categories that are more monetized than other, depending on the country.”

The most advisable thing is to mix the best of Desktop with the effectiveness of mobile ads. The marvel that the Internet represents is exactly that.

Marketers must understand the idiosyncrasies of the region and appreciate how they generate different patterns when it comes to Internet consumption. In Mexico, for example, a higher percentage of total video minutes is dedicated to ads than in Argentine videos, but Argentine sports sites dedicate more video minutes to ads than Mexican sports sites do. Understanding these subtle nuances is key to reaching target audiences effectively in the region.

Marketers Must “Understand the Digital Biorhythm” of a Diverse Region

Based on comScore’s data, a few general conclusions can be reached about Latin American Internet use: Latin American audiences dedicate 20% of their desktop minutes to social media, compared to North America’s 11%, the EMEA region’s 17%, and the APAC region’s 6%. Latin Americans also showed slightly more interest in entertainment-related content than the other regions studied, dedicating around 350 minutes a month on the category. 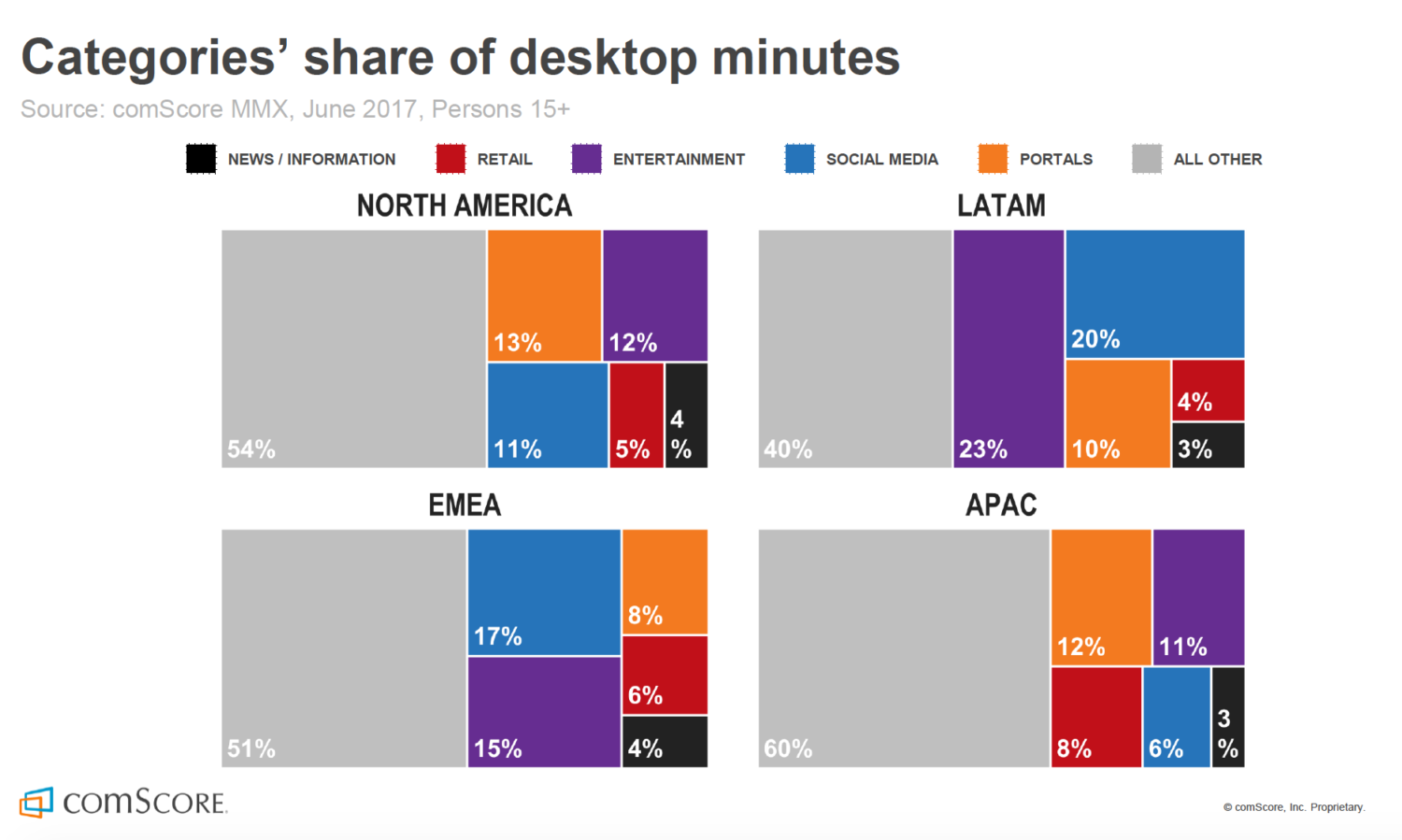 But in other ways, the region shows striking diversity. For example, in video categories, Mexican Internet users stand out for dedicating 140 minutes/month to video content on social media, compared to 45.7 minutes in Colombia, 37.2 in Argentina, 35 in Brazil, and 32.4 in Chile. In another example, Argentina and Colombia demonstrate far more interest in news and current events than Brazil, Mexico, and Chile.

Deep diving into the preferences and behavior of specific countries in the region, the report reveals how varied Latin American consumption preferences are.

It is important to understand the digital biorhythm and know that there are some devices that enjoy higher preference depending on the time of day, and the category of content they are visiting.

Marketers seeking to reach audiences on desktop must think about when, and for what type of content, LATAM audiences prefer desktop: In Argentina, over 80% of news, trips, cars, and government-related content happens on desktop, while the same is true of education in Brazil, and real estate in Mexico. 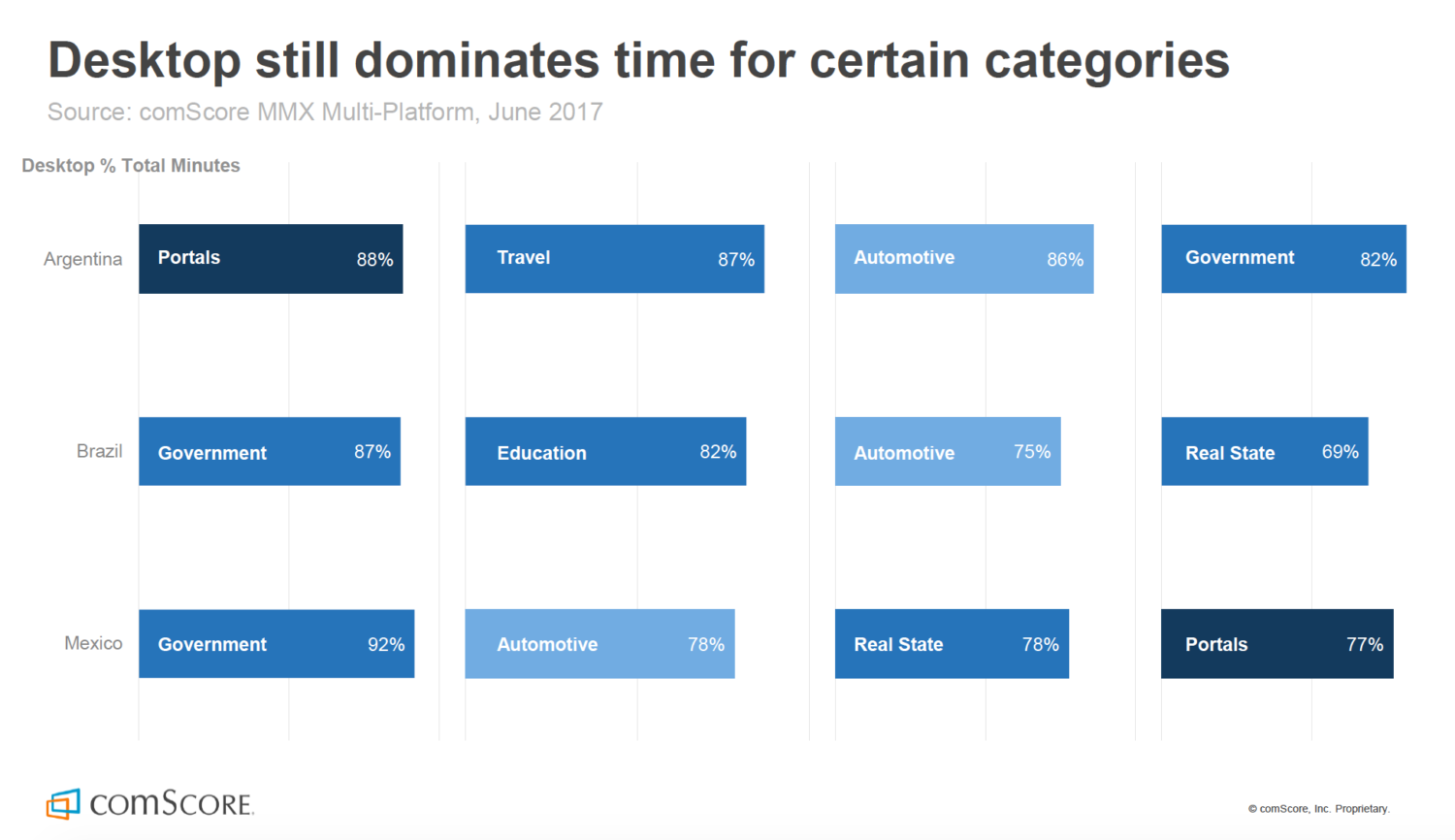 Cerón added that “depending on where my brand is positioned, I can focus my advertising efforts in a very precise way.” He cautioned marketers that “it is important to understand the digital biorhythm and know that there are some devices that enjoy higher preference depending on the time of day, and the category of content they are visiting.”

The report provides no easy answers for marketers looking to capitalize on a growing and active digital audience. But there are boundless opportunities and significant rewards for marketers that can cater to the region’s evolving and particular digital landscape. 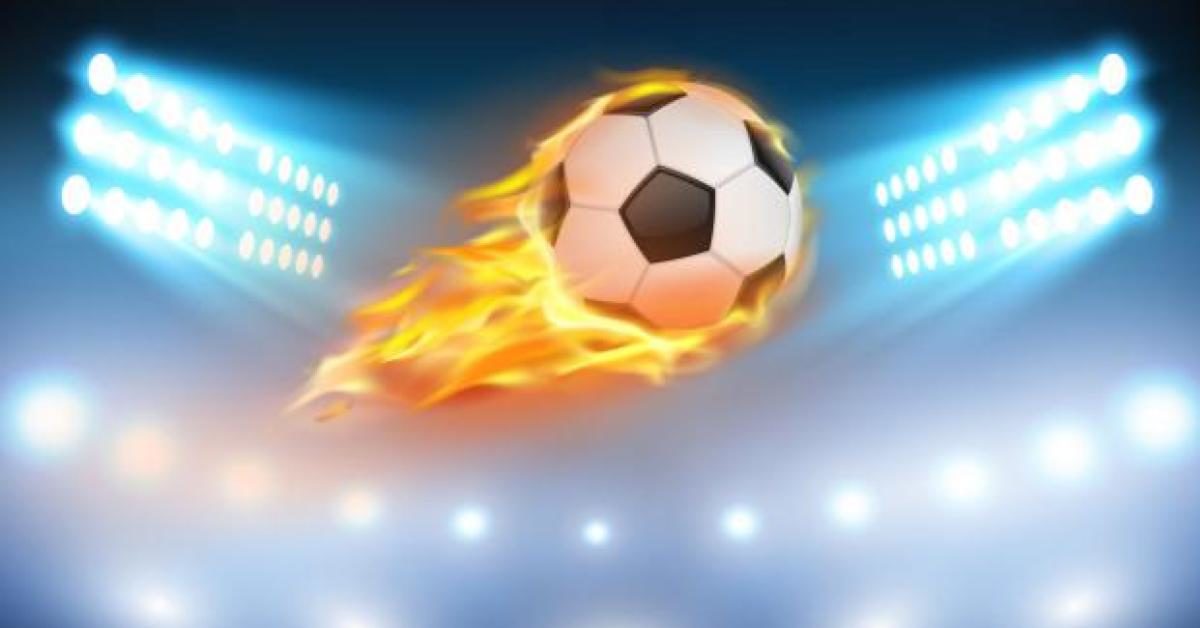