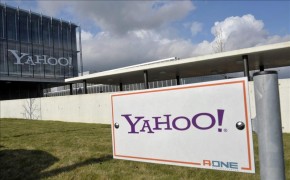 Yahoo Inc posted a 4 percent gain in net revenue to $1.22 billion in Q4, when an increase in search advertising sales offset weakness in the Web portal’s display ad business.

The company forecast net revenue — which excludes fees shared with partner websites — of $1.07 billion to $1.1 billion in the current quarter, trailing the $1.1 billion that Wall Street analysts expect on average.

Here are Q4 results compared to Yahoo’s past quarters by Tech Crunch:

Shares in Yahoo, which is trying to stave off declines across much of its business and revive growth, were up 1.5 percent in after hours trade.  The company said on Monday its fourth-quarter net income was $272.3 million, or 23 cents per share, versus $295.6 million, or 24 cents per share in the year-ago period.

Chief Executive Marissa Mayer is moving to revive the company’s fortunes after several years of declining revenue. Yahoo’s stock has risen roughly 30 percent since she became CEO, reaching its highest levels since 2008.