What? Yahoo’s homepage has been updated and introduced to seven global markets, six of them in Europe.
Why it matters? The new yahoo homepage is designed to work through desktop and mobile devices, with smartphone and tablet optimized versions.The new Yahoo´s page introduces native ads as one of the advertising options, available from next year

Yahoo’s homepage has been updated and introduced to seven global markets, six of them in Europe. The new homepage image debuted in the US in February and is now available in the UK, Ireland, Germany, France, Italy, Spain and South Africa.
The new-look Yahoo homepage includes more content and amount of data on tap, but does so in a less frantic way. The new Yahoo homepage has been designed to work through desktop and mobile devices, smartphones and tablet optimized versions.
The homepage will be updated introducing native ad formats or “stream ads” which resemble editorial content on the homepage, from next year.

The internet company has recently acquired startups including Summly and has also been participating in the IAB-led Native advertising Task Force.
The company’s goal after the introduction of such formats in the US early this year, is to play a key role in the online portal’s bid and attract European advertisers from 2014 onwards. 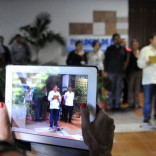