The thrill of free newspapers…

Grupo Zeta, one of Spain's largest magazine publishers is expanding its network of free weeklies. It currently owns 80 free weeklies in various Spanish cities. Weeklies cover both local and regional news, with a typical circulation of around 20,000 distributed by mail and public booths. Metro International and Schibsted, two large Scandinavian newspaper companies, publish free dailies in Madrid and Barcelona

…and how they are changing the sector

Advertising sales in the Spanish newspaper sector declined by 5.8% in the first half of 2002 compared to the first half of 2001 to 1.593 million euros. According to Luis Chaves, general director at Carat Expert in Madrid, the Spanish newspaper industry is going through a delicate phase due to the combined effect of the Internet and free newspapers. “Both factors are bringing a new audience to newspapers, one that was not exposed to them before. Newspaper companies can now reach more segmented audiences,” explains Chaves, “however, when planning media buys there is a higher risk of substitution of traditional newspapers by the Internet and free newspapers.” 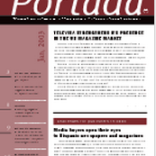