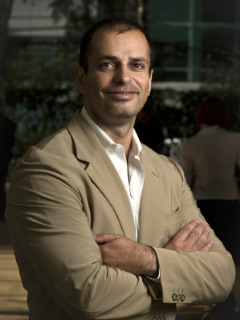 Fariña: “Visa’s campaign for the World Cup in Brazil will go beyond traditional media”

Adrian Fariña, Director of Marketing for Visa, talked with PORTADA during the Latam 2013 Media Festival about the brand’s positioning strategy and its plans for the upcoming 2014 World Cup and 2016 Olympics, both to be held in Brazil. “This will be Visa’s most global and most social campaign to date” he anticipated. Fariña also shared with Portada the advantages and opportunities offered by Visa’s digital media strategy. Visa has positioned itself as the world’s best payment method of choice. To do so, it has built a network  that processes payments fast and securely, in keeping with the demands of today’s world.

Portada: What strategy has Visa followed to position itself in Latin America?
Adrián Fariña: Overall, Visa has basically positioned itself as the world’s best payment method of choice.  In Latin America, we have used the same approach, basically offering distributors and merchants a more convenient, secure, and practical way to perform their transactions. We’ve also built a network to process those payments in a safer, faster, and more practical and convenient way than those offered by traditional forms of payment.
What is Visa’s investment in this area in Latin America?
Adrián Fariña: We cannot disclose investment figures.
Will you be increasing your advertising spending in the run up to the World Cup and Olympic Games?
Adrián Fariña: Yes, the plan is that ad spending will increase simply because of the scale of these events and their massive appeal—in other words, due to the fact that these are important events to be held in the region, and it will be the first time in decades that sporting events of such mass appeal will be held  in Latin America. It is obviously a great opportunity, and Visa is committed to investing solidly in these events.

The most global and social campaign in Visa’s history

And how will be that investment be outlaid? Do you plan to produce content for advertising or sponsor some programs?
Adrián Fariña: We are currently in the process of developing the World Cup campaign, which is the nearest event time-wise, and we are planning for it to be the most global and social campaign in Visa’s history.
It will be our most global, because the event’s appeal is obviously universal and goes beyond borders, and beyond which countries make the cut [to play]. We will develop a communication platform that makes global sense, while also creating opportunities for local tweets, especially in countries where soccer is more relevant, most obviously in Brazil for being the host country.

It will also be our most social campaign, since the emergence of social media and social networks will obviously allow this campaign to be implemented beyond traditional media: television, print, outdoor, and a strong presence in social networks.

Plus these events have the highest ratings worldwide…
Adrián Fariña: Yes, and especially soccer, which is the most massively viewed sport worldwide. But there is another phenomenon at play here, and that is that World Cup fans are more than just regular soccer fans. In other words, a World Cup attracts people who normally do not watch soccer, do not follow soccer, and do not get hooked on watching soccer during a normal year. A World Cup attracts almost double the number of viewers.
So, as I said, it is an event that reaches beyond borders and everyday interests. Everyone will be following the action unfolding in Brazil during the entire month [of the event].
Such as in my case—I don’t like soccer, but I do watch the World Cup.
Adrián Fariña: Exactly, you are the perfect example of many people who get engaged in the event and seek it out, which makes it a tremendous opportunity to associate our brand with that passion and those interests that transcend borders.
Will you be investing more ad dollars in some countries than others, or will spending be overall for the region?
Adrián Fariña: Our goal for this year is to invest in activities throughout all of Latin America, the Caribbean, and Central America. [Spending] will obviously vary by the size of the country—we can expect greater activity in countries like Brazil, Mexico, Colombia, and Argentina, but it simply has to do with the size of these countries.
We will obviously devote more to Brazil, since as the host country, it has to deal not only with its audience, but also the millions of spectators who will be visiting Brazil, and be involved with the  tournament and take advantage of it as a tourism opportunity as well. So Brazil is obviously going to get a little more, but the markets as such are those I mentioned earlier.
And then there are markets like Chile, for example, whose size is not comparable to Brazil or Mexico, but is experiencing great soccer fever and enthusiasm for its team, which gives us the chance to do a  good job of implementing our campaign.
What advantages does digital media offer your strategies?
Adrián Fariña: We definitely see two major advantages. First, digital media (and especially social networking) opens a two-way channel with the consumer that previously did not exist, allowing us to interact, receive feedback, and see what things work more than others—even more than in real-time.
This is incredibly enriching because it allows us to improve our communication and extend its appeal to more people.
The other advantage is that it gives us the chance to access a multitude of formats, to generate more content than we ever could with just traditional ones. It’s not just print, television, outdoor and press anymore.
We are now working with video different formats (six seconds, 15 seconds) and with pure text, photographs, user-generated photos, and user-generated content that we can amplify.
Our range of content options has multiplied and is completely favorable, allowing us to make our  campaign richer and potentially have more people connect with the brand.

In some ways, Visa is beginning to become a channel for people to communicate with other people, generating content that is relevant to others.

What kind of user-generated content?
Adrián Fariña: What we often do is activate our buzz generators such as soccer, or the Mexican team, in the case of Mexico. And obviously through Twitter, for example, people interact and send messages, and those messages get amplified because it is in some way a positive comment, a comment that helps us.
We also hold contests in which people send us pictures. For example, at Visa we offer many advantages for travelers, because we provide a secure and reliable form of payment which avoids them having to deal with exchange rates. We ask people to share their travel stories with us, be it through photos of their trip, travel anecdotes, the best restaurant they ate at, etc., and they are interested in sharing [that information] with their peers.
So in some way, Visa is beginning to be a channel for people to communicate with other people, generating content that is relevant to others.
Given the proximity of these two world-class events, we are talking about Visa’s broadest strategy in terms of marketing?
Adrián Fariña:It will be the biggest [campaign] we’ve done to date in terms of global scope and media richness. It will definitely be our most important, most global, and most social campaign in the history of  the brand.
Is there anything else you’d like to add?
Adrián Fariña:: No, but I would just note how interesting it is that these events will occur inside the  region. Latin America is a region that is very skilled and very close to sports, and generates great fanaticism and passion, but historically – at least in the last two or three decades – has seen these events from a distance, in a different time schedule, and in a geography that is alien to us . We had to
get up very early or stay up very late to be engaged in what was happening on the side of the world.
The most important thing is that we have events like the World Cup happening in our back yard, in our own territory and time zone, with a geography and style that we know and are familiar with, regardless of whether or not we are Brazilian. And this gives us an opportunity to connect our brand with that feeling, which is unique in history. We are truly excited to have the privilege to work at these events with a brand like Visa, given what a World Cup in Brazil represents.