CHECK OUT PORTADA’S INTERACTIVE DIRECTORY OF CORPORATE MARKETERS AND AGENCY EXECUTIVES TARGETING LATIN AMERICANS! If you want additional information or to acquire the database, please call Jennifer Chan  347-961-9516 or e-mail her at jennifer@portada-online.com. SEE A DEMO OF THE DIRECTORY! 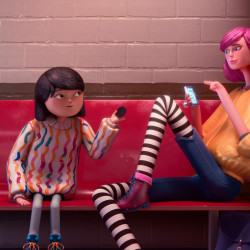 The OREO brand has launched its new, globally integrated marketing campaign Open Up with OREO, which conveys a simple but powerful message: open your heart to people who are different than you and you’ll discover the similarities. The new campaign addresses a behavioral shift that comes with age. While children are naturally open, adults begin to default to the familiar, which can cause them to close themselves off to others.The campaign will include a global TV spot, digital content series, in-store point of sale and, in select countries, global prizing and custom product embossments.The animated TV spot comes to life through the brand’s signature Wonderfilled aesthetic and upbeat music.  Set against the backdrop of a playfully diverse roller rink, the animation follows a young girl inspiring those around her to look inside themselves to let a little bit of wonder out and, in turn, let others in. In the spot, an OREO cookie is the catalyst for the characters to open up to each other. The spot launched in the U.S. on January 18 featuring the vocals of multi-platinum-selling, Grammy-nominated recording artist Adam Lambert. More than 50 other markets will follow with vocals, lyrics and languages adapted locally as necessary.In addition, digital content and a video series will launch February 2 to demonstrate how an OREO cookie can open an unexpected introduction, even a friendship, between two characters from different walks of life. The video series will be comprised of animated stories in which the characters share an OREO cookie and create a Wonderfilled connection.The new campaign builds on the brand’s success of making a global platform relevant across the globe by leveraging universal consumer insights, but executing in a way that reflects the local context and culture.

Sprite is swapping its claim “The way things are” for “Born to rfrsh” after almost ten years. Under this new slogan, Sprite is launching a new multimedia platform, with “Ambition” being only the first piece. The same team, both agency and client, which created the claim “The way things are” a decade ago is bringing a new concept for the brand: “Born to rfrsh” .The agency Hello_ , recently founded by Walter Aregger and Hernan Ibarra, has developed the new regional campaign for Sprite along with Coca-Cola South Latin and Coca-Cola Mexico. The reinvention of the brand appeals to teenagers today, unlike those of the past decade. Multimedia communication platform “Born to rfrsh” is being launched with the firstpiece, “Ambition.” The spot was filmed by the Perlorian  Brothers of MJZ and shows an encounter between an old man and a young man who rejects his old notion of ambition and success. Unilever’s Axe has released its ‘Find Your Magic’ campaign, developed by ad agency 72andSunny Amsterdam, which kicks off globally from 18 January in US and will include TV, print, OOH and custom digital content. Other partner agencies include Ponce and BBH, with VICE also creating content through the year.The campaign was made following a research showing that men feel pressure to conform. The study shows how Axe works with over 3,500 men in 10 countries and how men feel an overwhelming pressure to conform to masculine stereotypes, with only 15% of men in most countries strongly agreeing that they are attractive.The campaign will be reinforced by a series of short mobile and online tutorials featuring men with unusual style called ‘Instagroom’.

AC Hotels by Marriott, Marriott International, Inc.’s new upper-moderate-tier, design-led lifestyle brand, announced the appointment of NYC-based Figliulo&Partners (F&P) as its global agency of record (AOR) following a competitive review. F&P will handle all positioning and branding responsibilities for the lifestyle brand, one of 19 within Marriott International’s global portfolio. The brand, which currently offers a global portfolio of more than 80 hotels, is on a significant growth trajectory, with more than 50 additional locations slated to launch over the next several years, 22 of which are expected to launch in 2016.The appointment of F&P as AOR supports AC Hotels’ stateside expansion and their focus on creating premium design properties at an unusually smart value. The agency’s first work for AC Hotels by Marriott is anticipated to launch in Q1 2016 across a variety of lifestyle and business outlets, including print, out-of-home, video, digital, social and mobile.

RESEARCH: The 10 Most-Visited Sites by US-Hispanics