Viacom International Media Networks The Americas (VIMN) has announced the appointment of Carlos Penzini, currently SVP of Strategy and Business Development, as Brand Manager of Paramount Channel Latin America. He will lead the creative and operational growth strategy for the 24-hour movie network launch, in addition to his role as SVP of Strategy & Business Development.

Penzini will be responsible for the content and brand management of the network launching in November, while continuing his duties as SVP of Strategy and Business Development. Based in Miami, he will report directly into Pierluigi Gazzolo, COO of VIMN and interim Managing Director for VIMN The Americas.

As SVP of Strategy and Business Development, Penzini has been instrumental in The Americas  expansion strategy, leading multiple channel launches, new market assessments and strategic partnerships.  In 2013, Penzini led the operational takeover of MTV in Brazil, which currently reaches over 13 million Pay TV households . In 2012, he spearheaded the launch of Comedy Central in Latin America. In 2011, he spearheaded the rebrand of Tr3s into one of the premier entertainment destinations for Latinos in the US.Penzini joined MTV Networks Latin America in 2009 as Director of Strategy and Business Development. Previously, he served as Strategy Consultant at The Boston Consulting Group in San Francisco. Prior to this, he was at Amazon.com, on the Kindle division, and previously an Entrepreneur in South America.

Born in Venezuela, Penzini has a MBA from the University of California, Berkeley, Haas School of Business, a Master of Sciences in Finances form the IESA and a Degree in Engineering from the Metropolitan University of Venezuela.

“Paramount Channel continues to drive strong momentum around the world and we look forward to Penzini expanding our market leadership in Latin America by delivering the classics in a contemporary space that deeply connect with future generations,” said Gazzolo. 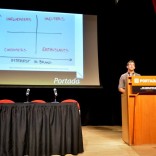