Ford Motor Co. this week launched Si todo fuera como un Ford (If Everything Was Like a Ford,) a new ad campaign introducing the brand’s new Hispanic value positioning, featuring features like the EcoBoost or the foot-activated back door.

According to a Ford spokesperson, the messaging of the new Spanish-language campaign works in tandem with the General Market campaign that is currently running. Using a “holistic approach,” the campaign launched via a high-impact 120 second roadblock across all Spanish language network and cable stations in the last commercial break of the 8pm hour, reaching 70% of the total Hispanic viewing audience.

The latest campaign was created by Ford’s Hispanic AOR, Zubi Advertising of Miami, and launched on 17 markets.

The new campaign ads can be seen here: 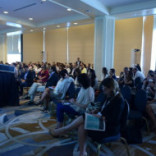