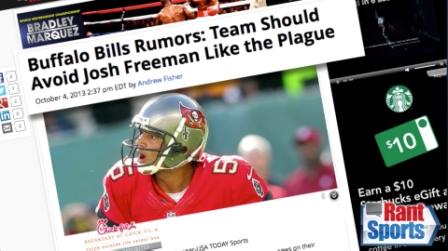 Rant Media Network, Inc, which operates the sports vertical Rant Sports  has received a US $3 million investment led by Hudson Bay Capital and former interClick (an online advertising technology company) Co-Chairmen and Founders Barry Honig and Michael Brauser.
The capital invested will be used to focus on expanding current properties and expansion of new properties with an emphasis on mobile and other technology buildouts.
Hudson Bay Capital has US $2.9 billion of total assets under management while Barry Honig and Michael Brauser coordinated the sale of interClick to Yahoo! for US $270 million in November 2011. In addition to the initial investment of US $3 million, the investor group has also given a firm commitment for an additional US $5 million investment into Rant Media.
Prior to the investment, Rant Sports was ranked the second largest independent sports platform and 12th largest sports platform in the U.S. by comScore in October. Rant Media is projecting 17-20 million visitors and 300 million page views for November 2013.
It has provided opinionated sports content that gives writers a platform and a community to share their viewpoints .This community has grown to over 300 writers producing 200-300 articles per day.
Currently , Rant Sports has a partnership with USA Today for content sharing and advertising. In the past, they have also worked with FOX Sports as a partner for content sharing. In addition, Rant Sports has also been involved in producing ad and digital marketing campaigns for Proctor & Gamble, Coors Light, Bud Light and Ominicom Media Direction’s Jim Rome Show.
Rant Lifestyle (www.RantLifestyle.com) and Rant Chic (www.RantChic.com) were recently launched to expand their coverage in the areas of lifestyle, fitness and exercise, entertainment and celebrities, as part a growth strategy for the Rant Media Network platform. 5.5-6 million unique visitors are being anticipated and 100-200 million page views in November .
“With the active commitment of our investor group now behind the company, there will be some new and exciting things in store for the Rant Media community. We believe that together we can amplify Rant Media’s growth and presence in different verticals,” said lead investor Barry Honig.