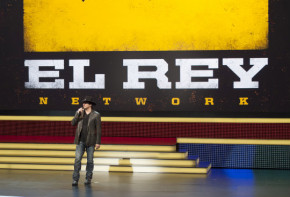 Univision on Tuesday made a surprise announcement at its upfront presentation in New York City by announcing it has made a strategic investment in El Rey Network, an English-language cable network geared towards young-adults and created by American filmmaker Robert Rodriguez and FactoryMade Ventures.

El Rey Network is one of four multicultural networks supported by Comcast under the merger conditions that allowed it to assume control of NBCUniversal.

During a morning presentation at The New Amsterdam Theatre, Univision Network President César Conde introduced Robert Rodríguez, who said El Rey Network was to become the home of “kick-ass entertainment.” Financial details were not disclosed.

El Rey Network will launch in December 2013 and have nation-wide distribution with initial carriage via Comcast.