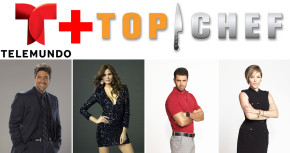 Hosted by novela star Aylin Mujica (“Corazón Valiente,” “Aurora” and “Marina”), the new version will feature eight major Hispanic celebrities competing for the Top Chef crown and a total of $100,000 to be given out to their preferred charities.  Famed TV host, author and one of the country’s leading Latina chefs, as well as competitor on season four of Bravo’s “Top Chef Masters,” Lorena Garcia, alongside James Beard award-nominated TV hosts and owners of award-winning Los Angeles restaurant “La Casita Mexicana,” Jaime Martin Del Campo and Ramiro Arvizu, will join as judges.

“’Top Chef: Estrellas’ is an innovative television concept that blends the best of Bravo’s successful Top Chef franchise with the intense passion our audience has for their favorite stars,” said Daniel Cubillo, VP Content Development, Non-Scripted at Telemundo. “Telemundo continues to innovate by bringing for the first time a cooking competition to Spanish-language prime time television.”
Telemundo’s Spanish language version will feature celebrities cooking their favorite dishes under the guidance and coaching of professional chefs.  The celebrities will participate in weekly competitions and use different “tools” in their preparations to impress the celebrity chefs and survive the grueling competition. In the process, the audience will get to know the celebrities in a more intimate personal way as they embark on this unusual culinary journey.  Emmy award winning production house Magical Elves will produce and Dan Cutforth and Jane Lipsitz will serve as Executive Producers.

Dra. Nancy Álvarez – writer, singer and television personality from Dominican Republic who, as a psychologist, sexologists and family therapist, is best known for hosting the talk show Quien tiene la Razon?.  She also has had a career as a singer and entertainer which started when she was 15 years old.

Fernando Arau – renowned and veteran TV host who started his entertainment career at a very young age.  In his early twenties, he hosted a kids’ TV show and in the early 90s starred in “Alcanzar una Estrella II” alongside Ricky Martin. Most recently, he was one of the hosts of Univision’s morning show “Despierta America.”

Christian Chávez – singer and actor best known for his role as Giovanni Mendez Lopez in the hit novela Rebelde and its spin off pop group RBD.

David Chocarro – Argentine actor, model and TV host  who has become one of the most popular heartthrobs in U.S. Hispanic television due to his roles in Telemundo novelas such as “La Casa de al Lado,” “Alguien Te Mira” and “Aurora.”

Lorena Herrera – Mexican actress and singer who has participated in more than 50 films since she began her career as a novela actress. As a singer, she has produced six albums, including the recently released “Desnudame El Alma.”

Cynthia Olavarría – actress, television host, fashion model, and former Miss Puerto Rico who competed in the 2005 Miss Universe in Thailand, where she was first runner-up. With her unique talent, charisma and beauty, she has had prominent roles in highly-rated U.S. Hispanic television shows, including top telenovelas and primetime specials.

Salesforce.com takes 300 million loan to pay the acquisition of ExactTarget