What: Standard Media Index has revealed that ad revenue from Hispanic television networks remained flat at $2.1 billion during the full 2017-18 broadcast season.
Why it matters: The relevance of sports events such as the soccer World Cup can make an important difference in TV share. The FIFA tournament helped Hispanic TV remain flat; without it, the revenue fall from 2017 is clear.

Standard Media Index has unveiled data for Hispanic TV during the 2017-18 broadcast season. According to SMI’s findings, ad revenue remained flat from the prior year at US $2.1 Billion. However, when equivalizing out the World Cup, ad revenue falls -5%. Telemundo picked up the largest gains from the soccer tournament, as it reportedly grew ad revenue by 16%, while Univision‘s ad revenue dropped 9% compared to the previous year.

“Results this season show the substantial impact that special events, like the World Cup and The Olympics, have in maintaining share for National TV,” said SMI CEO James Fennessy in a statement. “The World Cup managed to help Hispanic TV keep volumes at 2017 levels. When we back this out we see a fairly substantial fall in revenues for the just completed Broadcast Year.” 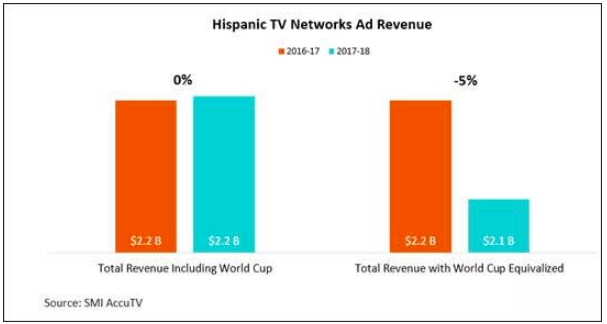 According to SMI’s data, the World Cup brought in US $122 million for Telemundo, bringing the overall revenue to US $647 million, which amounts to 16% YoY growth. The network also outbid Univision for the rights to the 2018 and 2022 World Cup.

Univision, on the other hand, saw a -9% drop in ad revenue this season. The embattled network has faced a tough year that included a carrier dispute with Dish Network and discarding plans for an IPO. Still, Univision is the largest Hispanic TV Network by volume. It brought in US $975 Million this year. 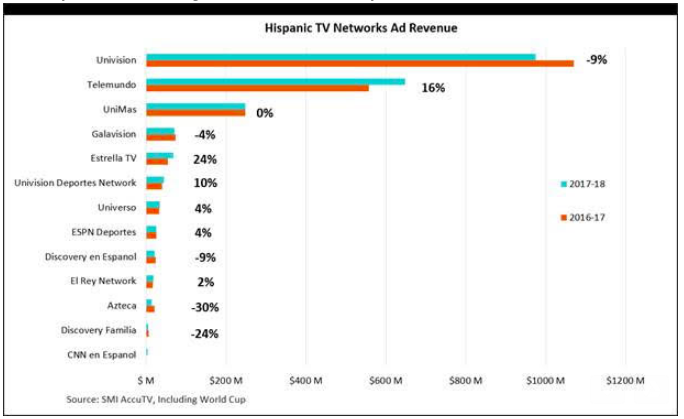 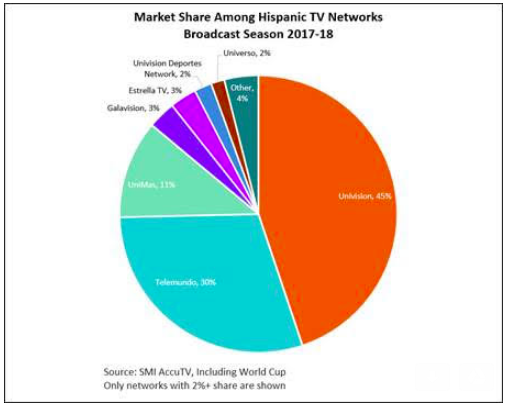 Primetime demanded the highest commercial prices at an average of US $3,753. Overall, Univision, Telemundo, and UniMas charged the most of the Hispanic networks. The most expensive program this year was Copa Mundial de la FIFA: Homenaje al Campeón on Telemundo, which cost US $197K for a 30-second spot. That’s followed by Univision’s Premio Lo Nuestro 2018 at US $133K and Premios Juventud 2018 at US $113K.

Advertiser Subcategories with the Largest Increases in Spend During the 2017-18 Season, Among the Top 30 Subcategories

Advertiser Subcategories with the Largest Decreases in Spend During the 2017-18 Season, Among the Top 30 Subcategories