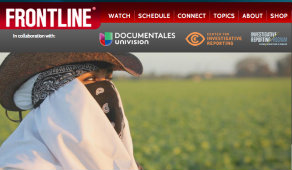 Univision on June 29th will air PBS’ Frontline Rape in the Fields/Violación de un Sueño, a film that investigates the sexual assault of migrant farm and packing plant workers in the U.S.

The film will air first (June 25) on PBS and marks the first time “Frontline” has shared a film premiere with another American broadcaster.

“This is the very first time Frontline has collaborated with a domestic broadcast partner on a premiere,” said Raney Aronson-Rath, deputy executive producer for Frontline, in a statement. “The sexual abuse of immigrant women in our farms, fields and factories is a story that needs to be told — and this unprecedented broadcast partnership with Univision is a remarkable opportunity to expand the footprint of this important journalism.”

“This program will undoubtedly be of very special interest to Univision’s audience,” says Isaac Lee, president of News for Univision. “We are committed to quality journalism and are proud of this partnership and of airing such an extraordinary investigative piece that brings to light the terrible sexual abuse that so many female migrant workers are being subjected to.

Frontline and Univision split the costs for the project. Financials were not released.