Scotiabank’s sponsorships in Canada and Latin America are focused on sports passion points like hockey and soccer, as well as arts & culture. How do we know this? We talked to Mike Tasevski, VP Global Sponsorships at Scotiabank, and a Portada Council System Member.

Until a few months ago, Mike Tasevski held the position of VP, Market Development at Mastercard. We asked him in what way his current job at Scotiabank is different from the one he had at Mastercard. “At Scotiabank, I have a global role in which I oversee a very different portfolio that is heavily focused on sports passion points hockey and fútbol with a very unique flavor of arts & culture. In comparison to my previous role, where there was a focus on multiple partners, my role at Scotiabank is to establish unique partnerships that will assist in delivering ROI on all channels for our bank objectives including personal banking, wealth and clients…

My role at Scotiabank is to establish unique partnerships that will assist in delivering ROI on all channels for our bank objectives.

Scotiabank has billed itself as “Canada’s most international bank” due to its acquisitions primarily in Latin America and the Caribbean, but also in Europe and parts of Asia. We asked Tasevski how Scotiabank’s marketing investment approach to sports passion points differs in all these regions. “The key focus in Canada is hockey due to the popularity of the sport in this nation,” he answered. “People widely consider us Canada’s Hockey Bank due to all our partnerships. Maple Leafs Sports and Entertainment (MLSE) (20-year sponsorship agreement valued at C$800 million, many Canadian hockey teams, the NHL, Hockey Canada) In the South America market, we are investing heavily in soccer (A major partner of Concacaf, Fútbol Club Barcelona (FCB), Costa Rica Fútbol, etc.)”

The Way to Mexico’s Heart: Fútbol 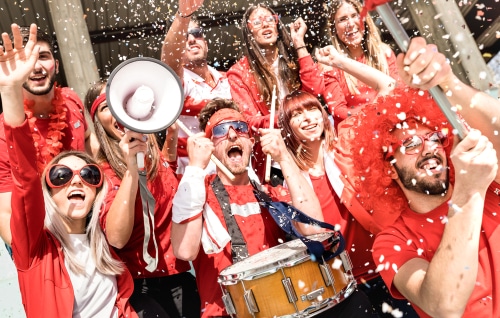 “Soccer/Fútbol will play an important role in the Latin American market. For example, there are over 25 million FCB fans in the Mexican market,” said Tasevsi. “Our association with FCB allows us to jointly communicate with the passionate fútbol fan and to educate them on the Scotiabank brand and how we can assist with all their financial needs. Fútbol is key in the Latin Market and we will continue to invest and support the growth of this sport passion point in this market.”

Our association with FCB allows us to jointly communicate with the passionate fútbol fan and to educate them on the Scotiabank brand.

The multi-year agreement will see Scotiabank become the La Liga side’s official partner in Latin America and the Caribbean, and it will work alongside the club to sponsor a number of soccer programs in the regions aimed at underprivileged youth.

Scotiabank will also set up soccer festivals and will support local teams in attending training events in Barcelona. On top of this, customers will receive exclusive ticket deals and competitions.