McKinsey Report: U.S. Latino Economy is the Third Fastest Growing in the World after China and India

The Latino Economy: U.S. Latinos account for the fastest-growing portion of US GDP. In fact, “if U.S Latinos were considered as their own country, it would be third only to the GDP growth rate of China and India in the past decade”, the “Economic State of Latinos in America Report” by McKinsey states. The study was unveiled at the Economic Mobility Summit recently organized by the Aspen Institute’s  Latinos and Society program.

U.S. Latinos are a driving force of the U.S. economy and account for the fastest-growing portion of U.S GDP. According to a recently released, McKinsey report,  Latinos have grown their household consumption to reach a cumulative $1 trillion market in 2021—a 6 percent annual growth rate over the last decade. Their household spend is higher compared to other groups at similar income levels, and yet marketing spending directed at Latinos most likely does not reflect this.

The unveiling of the report was one of the highlights of the recent Economic Mobility Summit organized by the Aspen Institute’s  Latinos and Society Program. The event brought together 200+ C-suite leaders across the private, public, and civic sectors to forge action-oriented partnerships and advance economic mobility for Latinos. In collaboration with McKinsey & Company and Variety Magazine, the gathering scaled up impact, promoted peer learning, and facilitated innovation.

The U.S. economy could grow faster and would be more resilient if there was more support for the Hispanic segment.

Diego Deleersnyder, Associate Director for Policy & Research at the Aspen Institute Latinos and Society program, tells Portada that one of the key takeaways of the event is that “the U.S. economy could grow faster and would be more resilient if there was more support for the Hispanic segment. ” Almost 20% of the U.S. population, almost 65 million, are Latinos, but they are still very underrepresented in industries such as the technology sector, where they are only 7% to 8% of the workforce. Anything that harms the economy of the Latino segment is going to end up harming U.S. prosperity in the long run,” Deelersnyder states.
This is even more relevant in the current context of economic uncertainty with concerns about a possible recession growing, and consumers looking for additional support.

Anything that harms the economy of the Latino segment is going to end up harming the U.S. prosperity in the long run.

The McKinsey report also states that “Latino consumers are often highly dissatisfied with the products offered to them—especially compared to their non-Latino White counterparts. This dissatisfaction ranges across product categories, from food and beverages to financial products, which may point to unresolved needs that impact their daily life. If brands address the drivers of dissatisfaction in terms of access and value proposition, there is a collective $109 billion of revenue at stake, when considering current spending and future potential should improved products be offered.”

If brands address the drivers of dissatisfaction in terms of access and value proposition, there is a collective US $109 billion of revenue at stake. 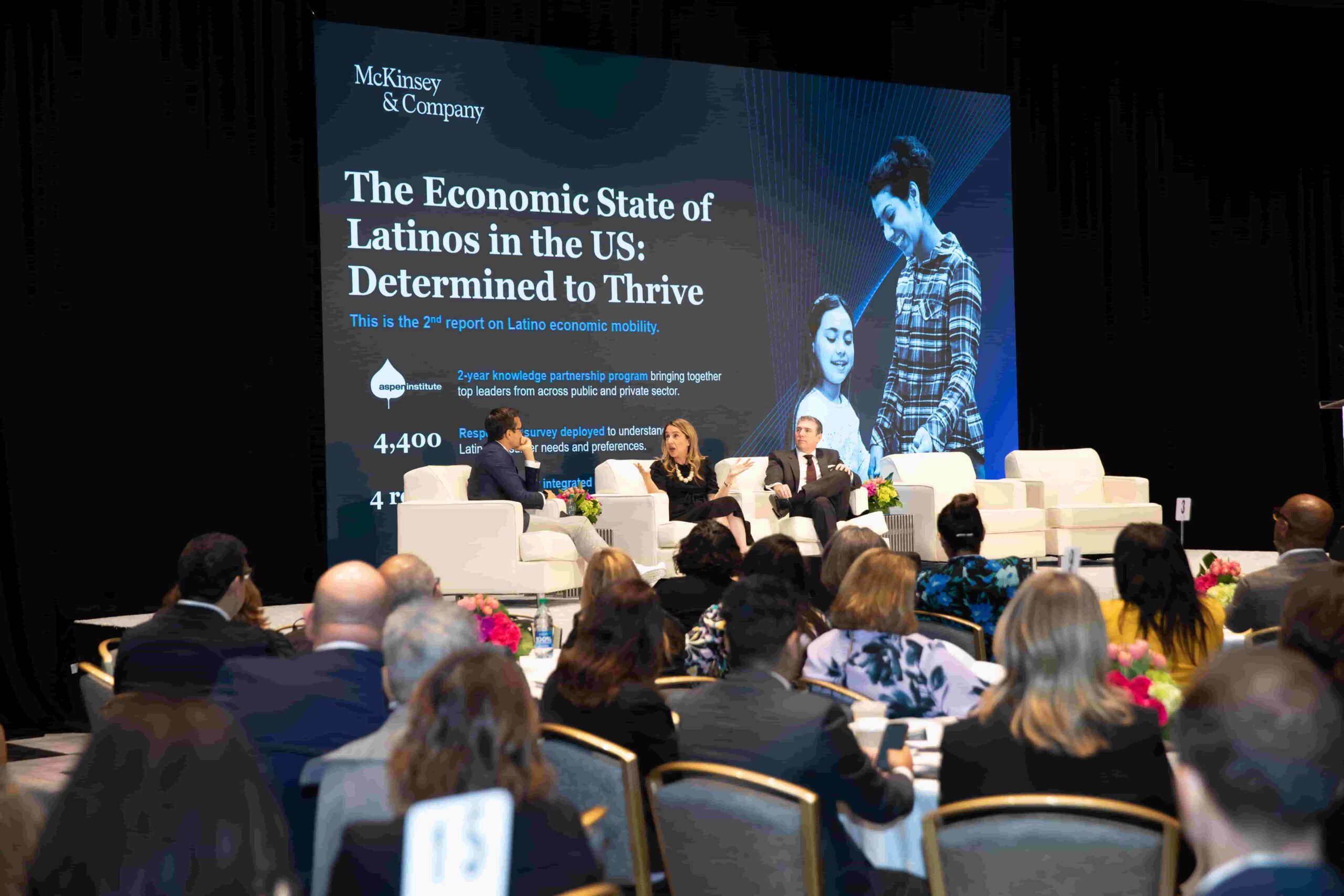 The above-cited “unresolved needs” are related to growth hurdles for the Latino economy. Ways to overcome these hurdles were discussed at the Aspen Institute event. They include:

Digital Inclusion and Digital Equity. Latinos lag behind in terms of access to high-speed Internet. According to Deleersnyder, “workers who don’t have digital skills are the most likely to be displaced from the job market due to digitalization and automatization of the industry.”It is also important that Latinos are digitally savvy so they have access to e-commerce platforms. Delersnyder notes that the implementation of digital upskilling and digital inclusion programs can revert this situation.

Latino representation in Corporate America’s C-level.  “We need to bring that representation closer to 20% in the long term, Deleersnyder notes. “Currently,  less than 5% of board members of Corporate America are C-level.  It is even worse for Latinas where the ratio lies at 1%,” he adds. There is also a lot of work to do to increase the amount of Latino and Latina-owned businesses.

Representation in the Media and Entertainment Industries.While Latinos over-index as moviegoers, they are clearly underrepresented in Hollywood and mainstream media. Precisely this challenge was discussed during the recent Aspen Institute event in several panels on Latino participation in media and entertainment.

Access to Capital: While Hispanic businesses are starting up at a faster rate than in any other segment,  they remain small and have low access to capital.

Make Latino Businesses Procurement Ready. Many Latino businesses do not have the organizational and technical skills to successfully bid at government and private sector procurements. In Chicago, the Aspen Institute has been working on a program in partnership with the Hispanic Chamber of Commerce for the last 18 months to make sure that companies are procurement ready and reach a larger amount of contractors. The program includes tracks to increase access to capital,  develop technical expertise, and foster an understanding of the procurement process by businesses.