THE IMPERATIVE: THE USE OF ANALYTICS TO INCREASE MULTICULTURAL MARKETING EFFICIENCY. A PRIMER

How Big Data is reshaping the understanding of the Hispanic consumer.

Benchmarks: How brands need to figure out internally how to measure their success against the Hispanic audience.

Learn from brand and agency partners reaching out to the Hispanic consumer how location and “off-line” analytics are transforming digital marketing.

Take a break and visit the exhibitors in the auditorium foyer.

Dowling recently was selected by Forbes as the #18 CMO in the world and #3 female CMO. The view from the top and the role of content marketing.

NEXT GENERATION MARKETING CHANNELS IN LATIN MARKETS: The Next Stage

Marketing and content distribution technologies have taken Latin America by storm. Global and Latin American marketing and Media Players will spot the new trends that are already shaping the ecosystem.

SHAPING THE FUTURE OF PANREGIONAL MARKETING: The Role of Miami

New technologies, currency devaluations and economic fluctuations are constantly redefining panregional marketing and the role of Miami as a Latin marketing center. Experts will answer questions including:

Stay in the middle of the action at Hyatt Regency Miami. Indulge in the spirit of the “American Riviera” at the Hyatt Regency located in downtown Miami just 15 minutes from South Beach and two miles from the Port of Miami.

Testimonials from Past Events 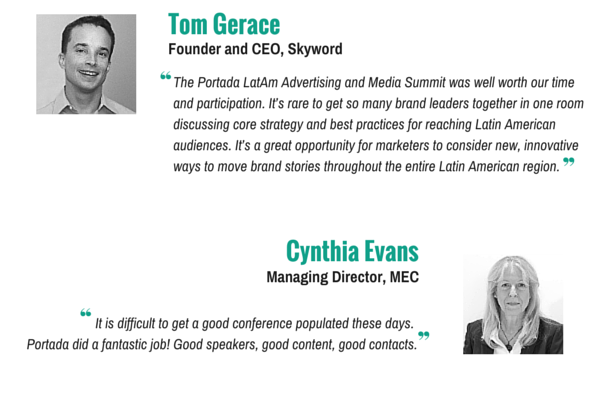 “Thanks for hosting a great conference with good content and speakers and the right mix of agency, media and clients!”
– Silvia Prado
Director, Digital Sales – Southeast & LatAm, Boingo Media

Book Your Ticket for the Next Edition!