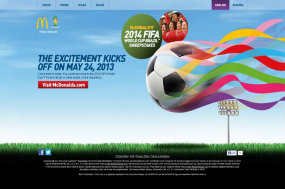 McDonald’s USA wanted to get a jumpstart on its sponsorship of the 2014 FIFA WorldCup in Brazil, so the company’s marketing team thought a good idea would be to launch an online sweepstakes engaging soccer-loving Hispanics with the brand and have them compete for a Grand Prize: Three VIP trips for 2 people to the soccer tournament in Brazil next year.

The sweepstakes, which launches today, consists of a bilingual website, which is supported by social media avenues, including a Twitter sweepstakes. More importantly, an initiative which was led by the Hispanic marketing team, quickly became a systemwide activation, involving several agencies that work with McDonald’s nationwide: Hispanic advertising shop Alma DDB of Miami; brand activation agency The Marketing Store, in Chicago; PR firm VPE of Los Angeles and ARC Worldwide, also from Chicago.

“What’s phenomenal is that this [sweepstakes] started as a Hispanic-led initiative, but it evolved systemwide,” Cristina Vilella, Director of Marketing at McDonald’s USA, tells Portada.

McDonald’s has been the exclusive restaurant sponsor of FIFA World Cup since 1994, and while it has launched many sweepstakes in the past, the one launching today is unique in the sense that it does not involve a mass TV or radio media buy component, but it is mostly driven by the web.

In addition to the sweepstakes, McDonald’s will be airing a soccer-themed commercial (below) developed by Alma DDB, which is airing in English and Spanish nationwide:[youtube https://www.youtube.com/watch?v=n6SVLHk2Uv8&w=560&h=315]