YuMe/SMG study: US Hispanics are 2 times more likely to stream on smartphones and smart TVs

YuMe and SMG (Starcom MediaVest Group) have published a multicultural survey that recognizes US Hispanics as an emerging force in digital video interaction. Results show that US Hispanic device ownership skews higher than for non-Hispanic US audience on a full range of connected devices, including smartphone, tablet, OTT, laptop, and smart TV, while leading the market in multi-tasking and mobile content.

In May 2014, YuMe and SMG Multicultural analyzed data from an Interpret New Media Measure survey of more than 3,100 US Hispanics and 9,000 general population respondents, looking for US Hispanic differentiation in video consumption, along with the influence of language in advertising. The research will be showcased at Portada’s 8th Annual Hispanic Advertising and Media Conference in New York City on September 18, 2014, where YuMe will have an exhibitor booth.

Portada talked to YuMe’s research team about the highlights of the study: The role of younger and older generations of Hispanics in the digital media space and the way they consume and media activities on different devices.

Portada: What have you found more surprising about the study?

YuME Research team: It was really interesting to see how consistently Hispanic Consumers over-indexed for streaming behaviors and ownership of entertainment devices. We thought that Hispanic Consumers might not lead as much on very “techy” devices or devices with a significant upgrade costs, like gaming consoles and smart TVs, but that’s where they had the largest leads in ownership vs. the general market.

It was also really surprising to see that much of the over-indexing may have been driven by the older generations of Hispanic Consumers.

It was also really surprising to see that much of the over-indexing may have been driven by the older generations of Hispanic Consumers. We don’t often think that 35-54 year olds would be streaming at the same levels as Millennials, but on household entertainment devices like connected TVs, we’re seeing that’s true for Hispanic Consumers.

Some interesting trends in the middle 35-54 age group:

Portada: What about the relationship between Hispanics and video?

Research team: “It’s not exactly surprising, but Hispanics as a whole report much lower levels of TV viewing and much higher levels of digital video streaming than the general market. It seems that digital streaming platforms and behaviors are more prevalent in Hispanics due to their desire to access appealing and relevant content. This is seen in their comparative device ownership levels, activity levels, and streaming motivations (when compared to the general population).

US Hispanic Consumers are more motivated to stream or download to:

Portada: What´s the main difference between Hispanics and non-Hispanics regarding video?

Research team: “The main difference between the Hispanics and non-Hispanics regarding video is how much higher the ownership and streaming activity levels are for digital entertainment devices especially among the middle to older generation of Hispanic Consumers. This is a group who seem to have a more diverse group of early adopters who are motivated enough to try new technology and behaviors to find what they really want to watch.”

US Hispanic ownership of devices mirrors that of the general market (non-US Hispanics), yet, the highest penetration is on smartphone and laptop. 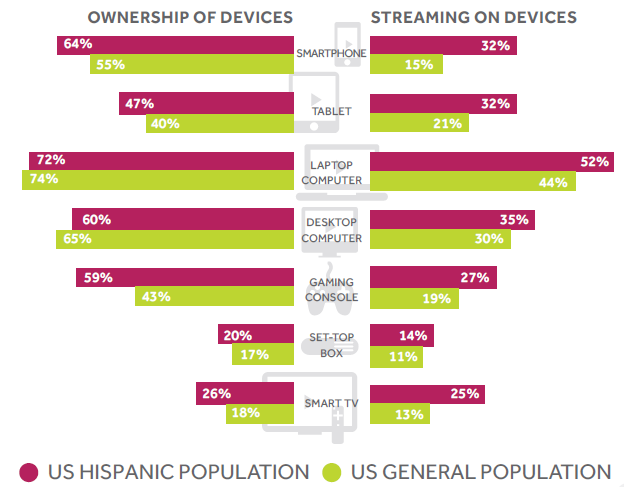 Two times more likely than the non-Hispanic US audience to stream on smartphone and smart TV. Typical smartphone activities among Hispanics are social networks (60%), short videos (47%), and streamed music (42%). 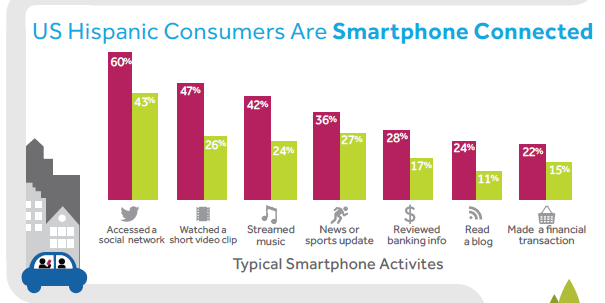 US Hispanics are 40% more likely to watch more than 5 hours per week of digital video content. 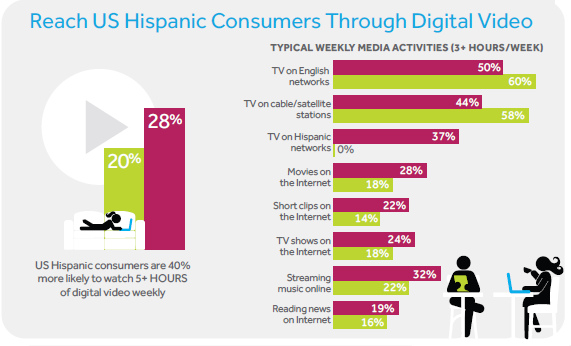 Younger Hispanics are driving device adoption and video streaming levels. “The tech behaviors of US young Hispanics (18-34) are rather comparable to general market Millennials. Among U.S. Hispanics, they lead ownership in emerging digital and entertainment devices like: smartphones, tablets, gaming, consoles, Blu-ray players, smart TVs and set-top boxes. They are avid streamers, leading the age groups at all levels of streaming and streaming on nearly all devices”, says the research team.

They are avid streamers, leading the age groups at all levels 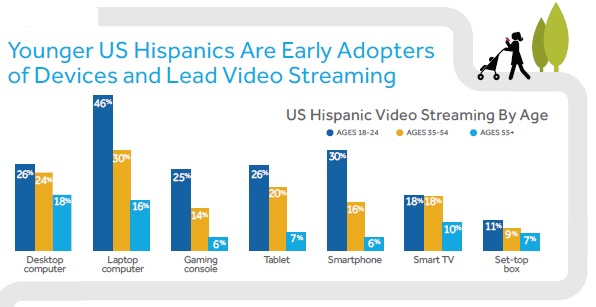 Portada also asked about behaviour of older generations of Hispanics:”The older generation of US Hispanic Consumers (55+) lead ownership of traditional digital devices like cell phones and desktop computers by large margins. They lead  the nearest age group by 8% and 16% respectively.”, according to the research team.

Portada: Why do you think Spanish dominant households are more likely to consume digital content?

Research team: “The answer seems pretty clear and seems to stem from the variety of video content available through linear TV or the lack thereof. Main motivators for Hispanic streamers to stream include: 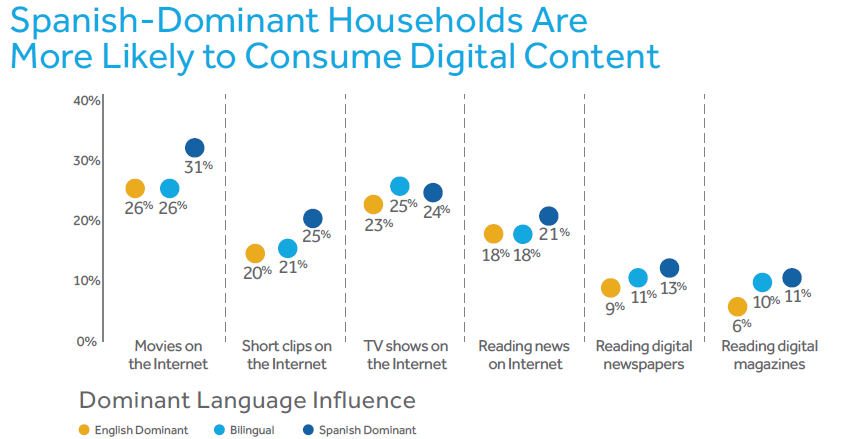 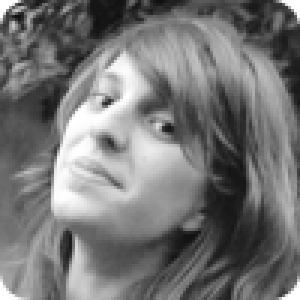