Opera Mediaworks will now be able  to reach the Hispanic audience across the United States at scale through U.S. and Latin American publishers.

Hunt Mobile has offices in Mexico, Costa Rica, Colombia, Peru, Brazil and Argentina. Its publisher network includes Terra, Argentina’s Infobae, Univision and Mexico’s Grupo Expansion among others, as customers.In all, the company reaches over 90 million mobile consumers a month across more than 500 publishers, in the Latin American market. The company will now bring an additional 1 billion ad impressions a month to the Opera Mediaworks platform out of the total 64 billion impressions under management.

Opera Mediaworks has previoulisly successfully worked on campaigns targeting U.S. Hispanics with global brands such as Syfy and T-Mobile.  Another campaign for a large U.S. retailer reached users from a custom, Hispanic-targeted site list on their smartphones with rich-media, interstitial video and standard banners. This resulted in standard banner click-through-rates (CTR) that were two times the industry average and interstitial video CTRs that were thrice the industry average.

U.S. Hispanics consume more mobile media than the general population and are 20% more likely to own a smartphone than an average mobile subscriber.

Opera Mediaworks offers behavioral targeting to reach those consumers when they are accessing content in English and Spanish. Additionally, it provides a range of custom targeting tools to reach Hispanic consumers, including custom site lists, social trigger targeting and Spanish language content.

“Opera Mediaworks is helping advertisers reach this highly-coveted demographic, while also helping publishers make the most of their inventory in Latin America, the United States and beyond ,” says Gaston Bercun (photo), Co-President for LatAm, Opera Mediaworks.

“Reaching the bi-lingual U.S. Hispanic community effectively is challenging. About 75% of them speak English at home more than half the time,” says Alvaro Bravo, COO of Global Advertiser Services, Opera Mediaworks. “That insight has a lot of implications as to how to effectively approach marketing to Spanish-speaking market, and Opera Mediaworks is now in a position to cover the largest minority audience, with 12% of the buying power in the United States,” he added. 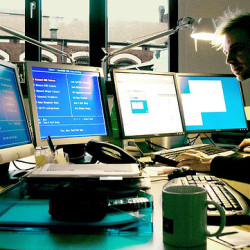