What: Twitter has released a new feature dubbed  “Moments,” a content curation feature oriented to  discover content from live events.
Why it matters:  Twitter has been trying to better monetize its products.  Brands will start testing a new ad unit called Promoted Moments in the coming days, and several more are in talks with Twitter to get on board. 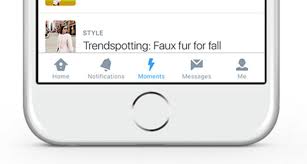 Moments, a feature not unlike Snapchat’s “Live Stories” that caters around human curation of live content, has been designed to turn conversations and events into something readable and retrievable, and to help people wade into the bristling chaos Twitter, and feel like they’re part of the conversation.

Moments follows behind Snapchat path, which has gained popularity among advertisers.

User can access the new feature by tapping the “lightning bolt” icon on the Twitter mobile app or in desktop.

The page shows a live feed of stories currently visible. Each “Moment” starts with an introduction screen of a title and a description. Then users can swipe (on a smartphone) or click-through (on desktop) to see related tweets, videos, Vines and GIFs. By tapping on the screen, users can favorite, retweet or reply to the piece of content. Twitter users can also share the entire Moment to their Twitter followers.

First, it gives stories and tweets a longer, more coherent life. Rather than flowing off thetimeline, it pulls things into a single place where you users can see it—and access it again later.

Second, it’s also a way to inject users into the path of the firehose in a more manageable way. If they are watching a football game, or the latest episode of Empire, they can opt to follow the moment around those two events. That will inject a real-time feed of good tweets into their timeline around that event.

“We know finding these only-on-Twitter moments can be a challenge, especially if you haven’t followed certain accounts. But it doesn’t have to be,” Twitter product manager Madhu Muthukumar wrote in a blog post. “Moments helps you find the best of Twitter as easily as tapping an icon – regardless of who you follow.”

Moments is a part of Twitter’s highly-anticipated “Project Lightning” initiative that the company — and some investors — believe can help put Twitter back on track for attracting new users and finding new revenue sources.

Twitter “Moments” sort of follows behind Snapchat path, which has gained popularity among advertisers not only for its hook to young millennials, but user engagement that is said to draw more than 4 billion video views per day.

“While we’re working with a small group of partners now, we plan to expand it in the future,” the blog post read.