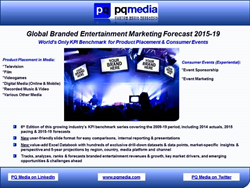 Powered by the fifth straight year of accelerated growth in product placement investments and strong expansion in consumer events in emerging markets, global branded entertainment revenues posted faster year-on-year growth in 2014 as paid placements in television, film and digital media combined with consumer event marketing and sponsorships to post a 6.3% increase to a record US$73.27 billion, according to the PQ Media Global Branded Entertainment Marketing Forecast 2015-19.

The U.S. is the largest global branded entertainment market, and leads in both branded entertainment and product placement, as brands and agencies have upped their investments in dedicated branded entertainment divisions, deals and campaigns, particularly among the Hollywood veterans, executives and investors seeking to capitalize on broadening opportunities to partner with TV, film, music video, and videogame producers and studios.

There is an increasing demand for integrations of products into scripts, instead of settling for background shots.

The US market represented almost half (47.1%) of the world’s branded entertainment industry, generating US $34.53 billion in 2014, a 7.3% gain compared with the prior year. American brand marketers and their agency partners have become more sophisticated during the past decade in their strategic planning and tactical execution of TV placements. Among the advanced strategies are increasing demand for integrations of products into scripts, instead of settling for background shots, and negotiating key placement deals to ensure close proximity to commercial breaks in which a brand’s product is slated to appear first in the ad pod of multiple spots to increase viewer engagement, according to PQ Media.

The US market represented almost half (47.1%) of the world’s branded entertainment industry, generating US $34.53 billion in 2014

Product placement is the smaller, but faster-growing segment of branded entertainment with global revenues increasing 13.6% in 2014 to US$10.58 billion, as the US, Brazil and Mexico combined to account for more than three-quarters of the total. Brands are increasingly forming dedicated teams within their corporate structures to manage branded entertainment opportunities by partnering directly with content providers on various aspects of product integrations. Brands are also focusing more placements in media content favored by younger audiences, with digimedia integrations producing the highest growth of the eight platforms tracked by PQ Media, rising 35.8% in 2014, followed by the growing popularity of placements in recorded music and related music videos of leading pop artists, driving 15.9% growth.

Branded Entertainment Marketing is an alternative marketing that blends brand messages with entertainment to engage consumers, build brand awareness and create positive brand associations to drive consumer sales. Branded entertainment aims to capture the consumer’s attention and elevate a brand’s image by associating it with popular personalities, media brands, organizations or events, such as TV characters, news outlets, sports teams, among others.

Product Placement is a Marketing tactic increasingly used by marketers as part of multimedia campaigns in which the objective is to place or integrate brand names, logos or specific products within the non-ad content of various media. The goal of advertisers utilizing product placement is to prominently place or creatively integrate brands or products into particular story lines or scenes to promote brand awareness, favorable brand attitudes and purchase intention.

#Portadalat: We Have Just Revealed the Theme of Latin American Advertising and Media Summit!