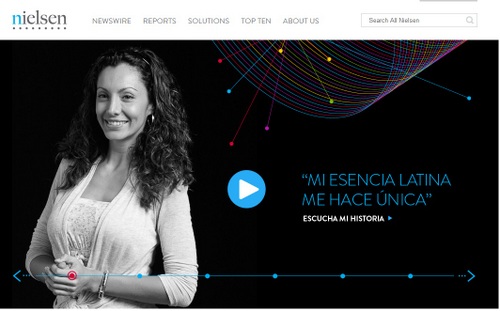 Latin3 has developed a multi-media campaign for Nielsen under the concept “You matter”, the landing page portraits the Latin essence through testimonial videos that talk about the tastes and habits of the Hispanic community, the challenges they face and their personal projects. The goal of the Nielsen campaign is to introduce Nielsen within the community, in order to achieve a closer relationship, greater recognition and, thus, a better predisposition on their members to participate in Nielsen’s market surveys. You can see the actions in the website here:

Latin3 was in charge of the media planning and buying and the creative actions as it is Nielsen’s AOR for the Hispanic market.

The campaign was launched in August 2013 and will be active until the end of January this year.

With the message “My Latin essence makes me unique,” the project staged the enormous influence of the Latino community in the United States. The tastes and preferences of Hispanic consumers contribute to build brands in a relevant way. This explains why a project like “Latino essence” is so important: in it, the main characters decide to engage with a brand like Nielsen and agree to participate in their studies.

“We are proud to have been chosen to help Nielsen understand and connect with American Latinos to build a significant relationship that would let Nielsen, Latinos, and the advertising industry as a whole grow closer than ever before”, said Matias Perel, Latin3’ CEO.

Latin3 featured a campaign’s video, to share what it is said here in an interactive and visual way: