Exciting news about Portada’s Latin American Advertising and Media  Summit:  Internet Entrepreneur Nick Denton, CEO and founder of Gawker Media, just confirmed his participation at the Summit, which this year will take place in Miami’s Intercontinental Hotel June on  4-5.

Gawker Media,  which comprehends nine websites the most popular of which is Gizmodo with 6 million uniques a month, is considered to be one of the most visible and successful blog-oriented media companies. Nick Denton’s Gawker Media aims to get 10% of its revenue from e-commerce this year. It also recently announced the launch of its gadget site Gizmodo in the Spanish-speaking world.  Prior to launching Gawker, Denton was one of the founders of  social networking  site First Tuesday and co-founded Moreover Technologies.  He began his career as a journalist at the Financial Times.

Stay tuned for more announcement about major speakers and thought leaders at our Latam Summit. The Latin American Advertising and Media Summit can be attended in combination with the Latin Content Marketing Forum which takes place on June 4 in the same venue. 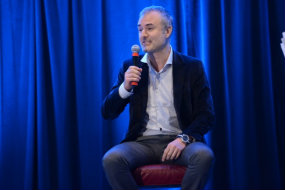