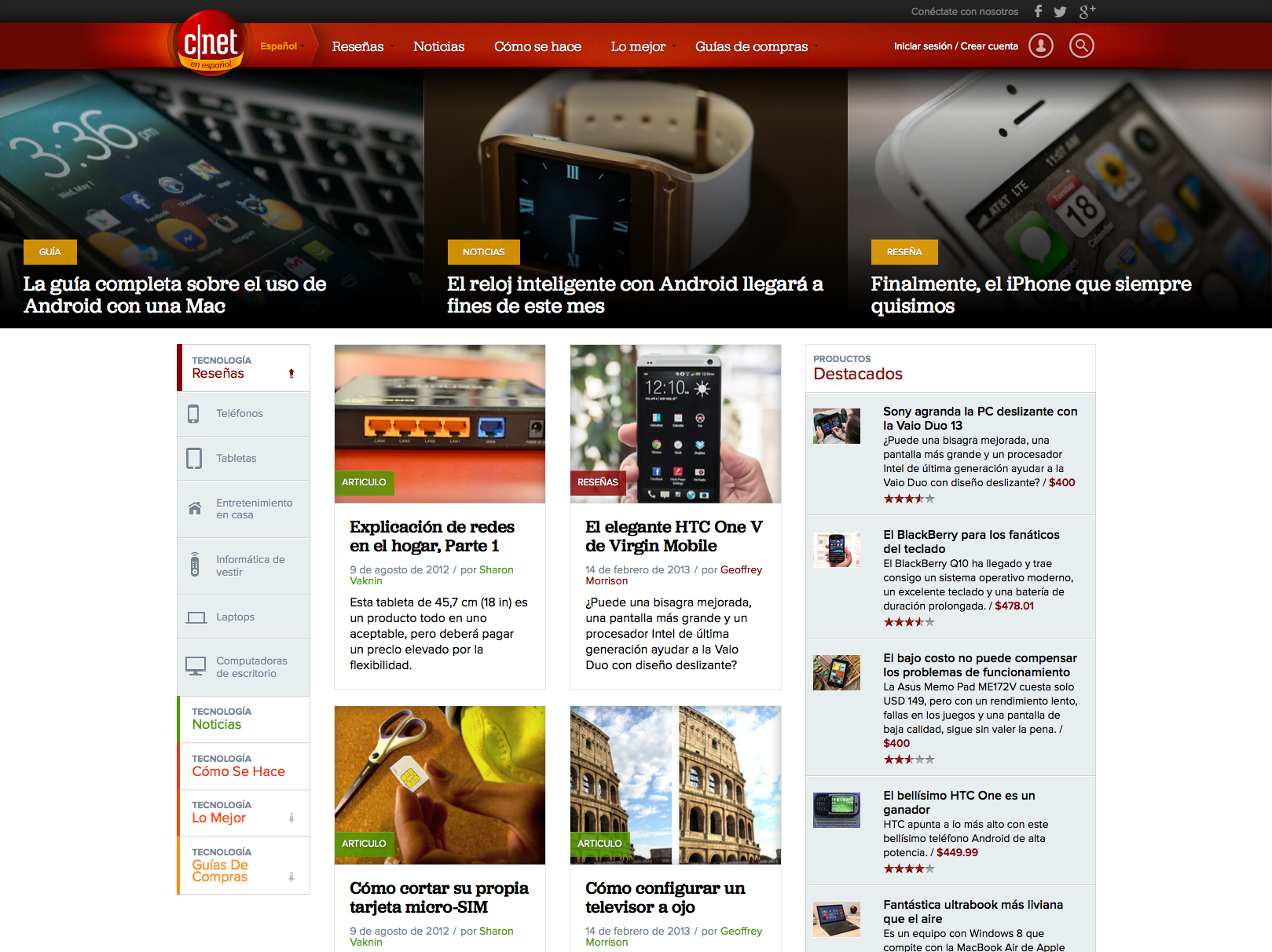 CNET en español will be officially launching this Thursday September 19. The launch marks CBS Interactive’s (CBSi) first foray into the Spanish-language digital media market. CBSi is putting a sizable amount of, mostly editorial, resources behind the launch. Key questions whose answers will determine CNET en español’s long term viability include: Will CNET en español’s medium term revenues be large enough to justify its relatively high overhead? Do Hispanics really want to read consumer electronic news in Spanish? Below all about the launch, including an exclusive preview of CNET en español’s home page.

Portada got an exclusive preview of the home page of CNET en español (below) to be introduced this Thursday September 19. The home page’s look & feel and content is similar to CNET’s english-language version emphasizing reviews and news. (Note: According to our source at CNET this is  a “preview” and not what the site will exactly look like.)

CNET en español will put a strong editorial focus on providing Hispanics with the best advice on issues related to telecommunications and consumer electronics, says Managing Editor Gabriel Sama,  This refers to specific issues faced by Hispanics, and not necessarily other parts of the U.S. population,  such as communications with the home-country or the quality of Spanish-content streaming services. This editorial focus is reflected in CNET en español’s editorial calendar for the weeks after the launch, which includes:

To develop these and other topics Managing Editor Sama counts with an editorial team of  12 full-time staffers. This team will be completely embedded in CNET’s overall team, Lindsey Turrentine, Editor-in-Chief of CNET reviews tells Portada. Turrentine stresses that CNET en español will not just be about translating content and that authenticity will be key.  According to Turrentine a key mission of CNET’s sites is to demistify technology. She also points out that many Spanish-language translations do not exist for English-technology words. As an example she cites Samsung’s new wearable watch. “There is a huge opportunity to establish new vocabulary in Spanish,” she adds.

How do you translate Samsung’s new wearable Smartwatch into Spanish?

Latin WE helps with Marketing and Sales…

For marketing and sales CNET en español is partnering with LatinWE, the Hispanic talent management and entertainment marketing firm co-owned by entrepreneur Luis Balaguer and actress Sofia Vergara. The agreement between both companies is a revenue sharing partnership. “This is an important partnership for us. There is no one in this market,” Latin WE’s founder Luis Balaguer tells Portada.  Below the main elements of the agreement.

Mobile communications provider T-Mobile is CNET en español’s charter sponsor. Katie Kulik, SVP Global Ad Sales and Strategy at CBS Interactive, tells Portada that T-Mobile has signed up for one year. “The partnership includes online display, video, mobile and other integrations.”
CNET en español does not have a dedicated sales team right now but the site is served by CNET’s (overall) sales team. Kulik notes that the main ad-categories she is targeting are: Consumer Electronics, Tech, Auto, Telecommunications and Big Box retailers.

…but will it be enough?

Several questions will need to be answered to determine whether CNET en español  will ultimately be succesful.  One question is whether it has too high editorial and other overhead costs as to make it economically viable. There is also competition as there are other gadget and consumer electronic websites in the Spanish-language market (U.S., Latin America and Spain). They include  Gawker Media’s Gizmodo en español, which was launched earlier this year as well as Spain’s Weblogs Xataka site. Both these sites have a substantially smaller cost base than CNET en español. During an on stage interview at this year’s Portada Latam Summit, Gawker Media founder and CEO Nick  Denton provided details about the recent launch of the Spanish-language version of Gizmodo.”We can become viable with a two-person, full- time staff by using our Kinja discussion platform, content from Gizmodo in English and a team of freelancers,” he noted.  “We can become profitable very quickly compared to a traditional media company, which needs to hire dozens of journalists, and may need up to 5-10 years to be profitable,” Denton claimed. He also said that blogs and content about gadgets are among the most profitable online publishing segments.

The words of the succesful digital media entrepreneur should not be taken lightly by CNET executives. However, it has to be said, that CNET is the strongest brand for consumer electronic media and tech reviews in the U.S. and internationally in most countries.
Another question is whether Hispanics are really hungry to read about consumer electronics in Spanish. That may be the case for Spanish-dominant Hispanics, but will that be enough? In some ways CNET en español goes against the trend: The vast majority of recent Hispanic digital media launches have been English-language sites targeting Millenials in English.  Additionally, it has to be taken into account that business and technology oriented magazines like Hispanic Business and Poder are mostly written in English. To Guillermo Abud,VP Digital Director at MediaVest, MV42 Multicultural in New York CNET’s en Español game and opportunity lays in the U.S. for Hispanic but also in Latin America. “Why? First of all, for many years, CNET has been a trusted voice in the Tech industry, not only in the US for Hispanics but in many countries around the world, they get a decent amount traffic outside the US including Latin America. Second, I think Hispanics are interested in reading Tech reviews in Spanish since as we know, Latinos are ahead in every sense when it comes to technology, they over index in all tech/digital indexes such as Smart TV ownership, online/mobile/tablet penetration, social media usage, watching video on many devices, and so on… CNET en Español will resonate and be relevant to first and second generation Hispanics, but I think CNET en Español’s future will be not only for Hispanics but also for Latin American consumers.”

…Is CNET en español the first of many CBSi properties venturing into Spanish-language markets?

Mark Larkin, CNET SVP and General Manager, notes that “CNET invented consumer electronic reviews”. Larkin adds that CNET  now has the mission to expand its leadership to Spanish-language markets. CNET’s Spanish-language brand extension has to be seen in the context of the (international) expansion of other verticals in the CBSi portfolio of properties. These brand extensions include gaming site Gamekult.com (France), Gamespot.com (Australian and British editions) as well as “X-Car.com.cn” href=”http://www.xcar.com.cn/”> x-car.com.cn (Interactive Auto media network  for China, with a similar site planned for later this year in the U.K.)

The plan, leading CNET executives tell Portada, is to launch now for the U.S. Hispanic market, and once CNET en español, gets a substantial amount of traffic from Latin America develop that region both editorially and for advertising sales.  In the medium and long-term Spanish-language editions for other CNET brands are a really possibility. Katie Kulik,  SVP Global Ad Sales and Strategy at CBS Interactive,  tells Portada that many English-language  properties have potential as Spanish-language editions both in the U.S. Hispanic market and in Latin America  including gaming site Gamespot, music site Last.fm as well as TV site TVGuide.com. CBSi, with close to 30 sites is the ninth largest digital media property worlwide with more than 270 million uniques per month worldwide.

(Note: Gabriel Sama, Managing Editor of CNET en español, will be participating in a panel on Mobile Marketing at next week’s Portada’s Seventh Annual Hispanic Advertising and Media Conference in New York City on Sept. 26)