Caesar Entertainment, the World wide gaming, hotel and resort company that owns and operates grand hotels including Caesars, Paris, Bally’s, Flamingo and Grand Casinos, has more than 60 online and mobile websites (see the list of properties below).  Portada interviewed Chris Kahle, web analytics manager at Caesars Entertainment to learn how the gambling and hotel giant markets itself digitally.

These two customer segments acquire  Caesar products directly at Caesar’s digital properties or through OTA’s (Online Travel Agencies ), via Teleservices or on property (via kiosks).


To target these distinct audience groups, each hotel property has its own website. Each property’s amenities (restaurants, spa’s etc) are underneath the same framework. “The navigation and look and feel is the same”, Kahle notes. The top properties in terms of unique visitors are Caesar Palace, Caesar Palace gets 30% of the Las Vegas market traffic, and TotalRewards.com.”  Interestingly, most traffic to Caesar properties occurs from the workplace between Tuesday and Thursdays.  Clearly people are  looking at offerings for the next weekend.

Kahle notes that  Mobile Traffic amounts to “20% of total traffic and is  growing at triple digit rates year on year.”  “We are in the process of re-launching our Mobile site using our Adobe CQ platform. We want to avoid mistakes we did in the past when we created a silo around the mobile site. With mobile it is  important to have a process of strong  centralization of content, process and structures.”

According to Kahle, to “build a digital property doesn’t mean that users are going to come  It is  about having a robust testing and optimization program that allows to test all content, functionality and system elements. Test and Target  changed our culture”. “Before, when selecting an online design the HIPO (Highest Paid Person in the Office”  always imposed his/her choice. This is not about an opinion but about getting high conversion rates.” The question, however, is whether the design works.”  As an example Kahle notes that “it was proved throughout testing that purchase buttons with the Caesar’s brand color would not work. The buttons would blend too much into the page. We clearly needed a button that stands out.” According to Kahle, button colors can substantially increase conversion rates.”

It was proved throughout testing that purchase buttons with the Caesar’s brand color would not work. 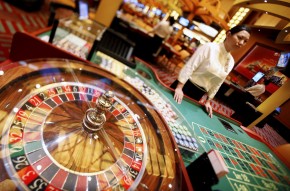 Caesar’s has a an internal team of copy writers and marketing managers that deals with Content Marketing. Digital Advertising is also done through Caesar’s media planning and buying agency Ogilvy.  According to Kahle, substantial emphasis is placed on geotargeting and retargeting.  He has seen that people in Los Angeles  is more interested in content about Caesar properties in Las Vegas than in say Atlantic City, NJ. Naturyally,  New York audiences are more interested in the latter. Caesar’s is also experimenting with a certain degree of personalization in ad targeting. “We are starting to serve based on up to 50 different audience profiles and personas.”

Kahle notes that some of Caesar’s digital properties have had a Spanish-language digital presence mostly targeting Latin American consumers. The Spanish-language content was translated from English into Spanish. According to Kahle, what is crucial for conversion rates is that “the translation is applied throughout the whole booking experience, not just on the landing page. ”

T-Mobile’s Diego Osuna: “Segment Marketers Are the Marathoners of the Marketing World.”