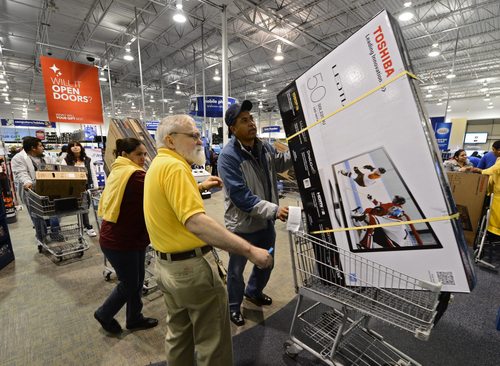 What: Walmart was among the top 3 retailers on Black Friday. Both in the brick and mortar retailers visit ranking as well as in the online retailer ranking, according to data revealed by research companies Placed and ComScore. Target and Best Buy also occupied leading positions in both the digital and off-line rankings. Amazon led in digital visits (see Tables in article below). For the holiday season-to-date, US$ 20.6 billion have been spent online, marking a 3% increase versus the corresponding days last year (with Thanksgiving falling so late this year the season-to-date this growth rate is being artificially suppressed in the short-term).
Why it matters: Brick and mortar retailers are trying to optimize their off-line presence to increase both off-line and online sales.

“While Black Friday – and now Thanksgiving Day – is the traditional kick-off to the brick-and-mortar holiday shopping season, both days continue to grow in importance on the online channel,” said comScore chairman Gian Fulgoni.

“Clearly many consumers prefer to avoid the crowds and lines typically associated with Black Friday by shopping from the comfort of their own homes, and we saw a record 66 million Americans do that this year. Also interesting is that the recent trend of kick-starting holiday shopping by opening stores on Thanksgiving Day seems to be having a spillover effect on the online channel.

Thanksgiving once again posted a well above average growth rate and is the fastest-growing online shopping day over the past five years, as more Americans opt for couch commerce following their Thanksgiving Day festivities.”

Because comScore is counting desktop, and doesn’t seem to be incorporating mobile, it’s still going to be interesting to see what mobile engagement and spending looks like by the numbers, as Techcrunch points out. IBM said that mobile traffic grew to 39.7 percent of all online traffic, an increase of 34 percent over Black Friday 2012. Mobile sales reached 21.8 percent of total online sales, an increase of nearly 43 percent year-over-year.

To better understand which retailers were most successful at driving people into stores on Black Friday, Placed analyzed offline shopping behaviors from Placed Insights service, which measures more than 125,000 U.S. smartphone panelists who have opted-in to share their location. The study revealed this year’s Black Friday winners: Walmart was by far the top shopping destination this Black Friday, beating out its nearest competitor, Target, with more than twice the share of total shoppers. Best Buy remained a top destination for Black Friday shoppers ranking as the #3 most-visited retailer. Retailers that chose to remain closed on Thanksgiving, including The Home Depot, Lowe’s, Sam’s Club, and Costco, lost no time in driving people into stores on Black Friday. All four retailers secured spots within the Black Friday Top 10. Macy’s was the winner among department stores, ranking as the top gainer in week-over-week traffic share followed by J.C. Penney, Kohl’s, and Sears.

Retailers that chose to remain closed on Thanksgiving, including The Home Depot, Lowe’s, Sam’s Club, and Costco, lost no time in driving people into stores on Black Friday.

Big box and department stores weren’t the only ones that saw solid gains on Black Friday. Apparel and specialty retailers Old Navy and Victoria’s Secret, secured 2 of the top 3 spots in the top-gainers ranking.American Eagle, which won last Black Friday, once again displayed a strong showing in store traffic on the busiest shopping day of the year.