Telemundo has announced an expansion to its local news operation to better serve the local Hispanic community in the Rio Grande Valley region. The station will enhance its current newscast, “Noticias Telemundo 40” by welcoming a new team of anchors, who will join news anchor Dalila Garza and “Acceso Total” entertainment reporter Mayra Galvan weekdays at 5 PM and 10 PM.

News Co-Anchor Hugo Magallan and Weather Anchor Elizabeth Robaina have been hired to support the investment in live, local breaking news and weather . Hector Zapata has been promoted to Sports Anchor.

Magallan most recently worked as the morning news anchor for Univision McAllen from 2008 to 2014. He received his bachelor’s degree in Accounting from the Universidad Regiomontana in Monterrey, Mexico.

Robaina joins Telemundo 40 from WAPA-TV in San Juan, Puerto Rico, where she served as a weather anchor. She also worked as a weather anchor at Univision in Laredo from 2012 to 2013. A native of Cuba, Robaina received her bachelor’s degree in Communications and Journalism from the University of Texas-Pan American.

Zapata has worked at Telemundo 40 since 2012 as a news and sports reporter. He received his bachelor’s degree in Communications from the University of Texas-Pan American.

Ogilvy & Mather Chicago has appointed Antonio Nunez as the new Head of Planning of the agency’s Chicago office starting in September.He will report to Ogilvy Chicago president Lee Newman and oversee the agency’s planning department. He will work closely with Ogilvy’s global network and across Ogilvy Chicago’s other marketing disciplines to grow the group’s planning capabilities. A native of Spain, Antonio will add to Ogilvy Chicago’s growing international leadership team.Antonio has worked for Young & Rubicam and Euro RSCG. He later moved to Saatchi & Saatchi  and in 2007, he become partner at SCPF WPP agency and collaborated to launch its Miami hub. Antonio will relocate from Madrid to Chicago beginning in September.

Gina Sanders has been named to the newly created position of president, Condé Nast global development. She will work with the company’s current and prospective global business partners to create new business opportunities. A 26-year Condé Nast veteran, she previously was president and chief executive officer of Fairchild Fashion Media. She has also served as VP and publisher of Teen Vogue, and held the same posts at Gourmet and Detailsmagazines.

Zimmerman has appointed Deutsch’s Michael Goldberg as its new CEO.Goldberg, who will replace former CEO Pat Patregnani, will focus on helping the Fort Lauderdale-based Omnicom Group shop take its retail specialty to the next level.He will be based in New York .Mr. Goldberg was CEO, in 2003. Mr. Goldberg stayed at Zimmerman as CMO until he left to join Omnicom’s Porter Novell as global CMO in 2011. Now he’s coming back to Zimmerman, a CEO again.

Bessie Ramírez has joined Terry Soto at About Marketing Solutions, Inc. as Managing Partner. Most recently, Bessie was a Principal at Santiago Solutions Group where she consulted on growth strategy, innovation and marketing for healthcare, consumer packaged goods, financial services and health and beauty clients. Bessie has consulted on strategy and marketing for a variety of companies including such as Health Net, Quaker, The Home Depot, Wells Fargo, Johnson & Johnson, Procter & Gamble, Hewlett Packard and Bacardi. 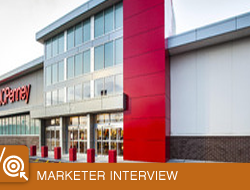 JC Penney’s Lyris Leos: “The best career advice I’ve ever received is Get out of your own way!”