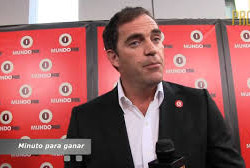 Emilio Saccone has resigned his position as president of MundoFox, the Spanish-language network backed by News Corp. and Columbian programming giant RCN, TVNewscheck reports. In a memo to staff, Saccone announced “a very personal decision” to step down from the position on Jan. 15, 2014, “to look at some more entrepreneurial ventures.” “I love building brands and teams. I also love creating, developing and producing content,” the memo said. “Launching (and then running) a U.S. broadcast network for the past almost two years has been a personal highlight of mine (and arguably my own Ph.D. on television!). It also made me realize just how much I miss that creative process.” Saccone was named president of MundoFox in March 2012 after serving as Fox International Channels’ president of entertainment and EVP of content. Fox Networks spokesman Scott Grogin says Saccone and MundoFox have agreed to a “first look” deal to develop television series for Fox International Channels.

Toyota has appointed two communications executives to newly created roles that it says will help the company further engage Hispanic and black consumers in North America. Patricia Pineda, most recently head of the Toyota USA Foundation, was named VP of Hispanic business strategy for North America. She is reporting to Julie Hamp, group VP and CCO for Toyota North America. Pineda will also oversee Toyota’s new Hispanic Business Strategy Group, focusing on increasing awareness of the Toyota, Lexus, and Scion brands to Hispanic consumers. The automaker has also appointed Jim Colon, previously VP of product communications at Toyota Motor Sales, to serve as VP of African-American business strategy for North America. Colon, who has held various roles at Toyota since 1980, will also report to Hamp.

LAPIZ, the marketing agency for emerging cultures inside Leo Burnett, has announced that Fabio Seidl will join them as SVP, Executive Creative Director. Seidl will report to LAPIZ CCO Laurence Klinger and will manage creative product across the agency’s client portfolio.
International television content and production company FremantleMedia appointed two new CEO’s for the U.S. Hispanic market and Latin America reinforcing its Portuguese-speaking presence with Daniela Busoli in Brazil and its Spanish-speaking presence with Adrián Santucho for Mexico, US Hispanic and Pan-Regional productions.

David Zaslav has signed a new contract that will keep him as CEO of Discovery Communications through the end of 2019. Zaslav joined Discovery as CEO in January, 2007 from NBC. Zaslav’s annual salary will remain $3 million but his bonus will increase on an annual basis. He received $49.9 million in compensation in 2012, including $25.3 million in stock awards and $15.8 million in option awards on top of his salary. The new contract will make him a “significant long-term shareholder” in Discovery Communications, the company said.