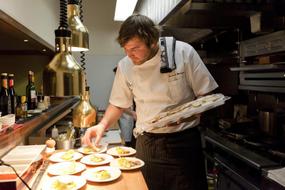 Hispanics make up about 10 percent of Red Lobster’s clientele, a number that matches the industry standard. Hispanic consumers are projected to account for 25%of the increase in consumer spending on food away from home between 2010-2015,  according to IHS Global Insight. These numbers are increasingly leading 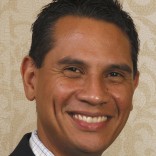 restaurants to invest in their Hispanic customer base, a population that accounts for about 9.8 billion restaurant visits >every year. We talked to Stewart Marquina, Marketing Director – Strategy & Innovation at the casual dining restaurant chain Red Lobster which recently did its first ever Spanish -language ad campaign and about his overall marketing strategy. Marquina is leading the long-term plans for Red Lobster as Marketing Director of Strategy and Innovation. Prior to  joining Red Lobster owner Darden, he spent 4 years at Andersen Consulting and 8 years at P&G in multiple countries (including Canada and Venezuela), categories and roles.

Portada: Why was Spanish chosen as the main language to connect with the Hispanic population in your recent campaign? Are you only targeting the Spanish-dominant segment of the population? What efforts are you undertaking to reach out the bilingual sector of the population?
Stewart Marquina, Marketing Director – Strategy & Innovation Red Lobster.“Prior to this effort we were reaching 51% of the target audience based on their consumption of general market media.  However, with dedicated Spanish language advertising in the right channels – that percentage increases to 91%. Further ,our campaign is built on cultural insights that will resonate with Hispanic consumers, whether unacculturated or bicultural.”

Can you explain what plans you have in the digital and print realms? (or any other?)
S.M.: “This is a national, ongoing campaign with a comprehensive media buy across multiple Spanish-language networks like Telemundo, Univsion, Telefutura, Nat Geo Mundo, ESPN Deportes, and Fox Deportes, to name a few.  This initiative also extends to other relevant touchpoints, including digital, PR and in-restaurant.”

S.M.: “It all goes back to the way Hispanics look at the dining experience: as an opportunity to bring family and friends together to celebrate, share and bond. This is true anywhere.The one challenge with Hispanics who grew up in Latin America is that they did not experience our brand in there. That’s why delivering an insight driven and culturally relevant message is so important.”

S.M.: We understand that all Red Lobster’s are owned and operated. Why isn’t Red Lobster using the franchise model and would this model impact its marketing in a different way?
“Our restaurants are operationally complex and don’t lend themselves to a franchise model. Owning and operating all our restaurants allows us to be highly nimble and allocate capital efficiently. For example, we’re able to effectively leverage our scale for things like advertising, and purchasing and distribution.”

Red Lobster is a national brand. How does it connect with local audiences (incorporating the different origin the Hispanic population has all over the U.S. and other nuances?

S.M.:“In the past year, Red Lobster has gained tremendous insight into the Hispanic demographic to develop a strategic marketing platform to appeal to the complex identity of the Hispanic consumer.We are using insights that resonate very well across all U.S. Hispanics.”