“StartmeApp’s value proposition is linked to direct response marketing—we are looking for accurate results. It’s not just about media buying, clicks or impressions, but about transformation: transforming impressions/clicks into the response that advertisers are seeking from the audience,” says the company founder.

“We have the chance to position ourselves in the Latin American market while the market is still developing, but we possess the know-how to play in other markets and that’s what we’re doing,” adds Campos Carlés. The company, which was founded in Argentina and later expanded throughout the region, also has a presence now in Europe and Singapore.

StartMeApp’s revenues come mostly from Latin America (70%), but according to its founder: “This year we expect revenues in Latin America to be dispersed by revenues from Europe and Asia.”  In Latin America, the company derives the bulk of its business from Argentina, Colombia, Mexico, and Brazil. Campos Carlés says that the company was profitable from day one and generates its own customers. It had a marginal contribution of about 50%, with EBITDA of nearly 20% last year.

“Latin America has a very small market presence in mobile advertising,” asserts Campos Carlés flatly. “In the E-marketer report published two months ago, Latin America appeared as a separately listed region for the first time. In last year’s reports, Latin America’s market presence was so low that is was lumped under ROW (rest of the world). Even though the region’s metrics and projections are very positive and point to high growth, it still lags far behind other regions,” he added.

For Campos Carlés, the low market presence of mobile advertising in the region is due to several factors. The first has to do with the population, which is low compared to other regions, he says. As a result, the number of mobile telephone subscribers is also low. “Smartphone penetration in the U.S. will reach 80% next year, while that number is only expected to reach 30% in Latin America,” Campos Carlés told Portada.

Portada: What are the causes of Latin America’s delay in getting into the mobile advertising market, in comparison with other regions?

Alejandro Campos Carlés: The situation is that the subscriber base is still prepaid, not postpaid, and the featured phones base is still very strong. In regards to carriers, the passage from 3G to 4G is just beginning, which causes data transfer rates to be slower. Government decisions are also a factor, because they influence technology, infrastructure, and investment. Brazil is an example of how government decisions influence market development. In Brazil’s case, the country is going digital in preparation for two major sporting events Brazil will be hosting—the World Cup and the Olympics. This is an example of government joining forces with operators in an effort to generate infrastructure. And finally, there are regulatory issues: the region is highly monopolized.

Market rules are starting to change, because regulation is beginning to take place. But we must also keep in mind that it will take a while for Latin America to replace its fleet of featured phones with smartphones.

Portada: What is the current investment flow in mobile advertising in the region?
Alejandro Campos Carlés: Today we have pan-regional and local spending, but both advertisers and agencies still have little knowledge [about mobile advertising]. Online advertising is important here, but if you compare it with traditional media it is still marginal, despite the fact that it is growing at impressive rates. IAB reports rates of about 40% annually in the region. If online spending is marginal compared to traditional media, imagine what mobile ad spending must be.

Latin America gets residual pan-regional advertising from mobile global campaigns. That is beginning to change.
On the other hand, advertisers are unsure about how to enter the mobile advertising market, faced with a wide variety of offerings and multiple operating systems. In fact, StartMeApp launched an event in Sao Paulo called Movilizando Latinoamérica (Mobilizing Latin America), to demonstrate what the channel is all about and what can be achieved with it. We will be repeating the event in Mexico, Miami, Colombia and Argentina.
Portada: What will be this year’s surprise?
Alejandro Campos Carlés: The market is giving very precise signals that this year’s surprise will be RTB (Real Time Bidding). In 2009, RTB was just beginning to be used as a purchasing technique and represented 1% of online advertising buys at the time. Today, its use is impressive and is growing at a rate of 300% month after month.

In regards to other mobile devices besides smartphones, Campos Carlés highlights the importance of tablets for mobile advertising. “Tablets are making a difference. Tablet shipments to Latin America next year have been estimated at $3.7 trillion, of which 1.7 will be spent in Brazil,” said Campos Carlés.
According to the executive, there are 24 million tablets in Brazil today, out of a population of nearly 300 million—which reflects low penetration compared to the population, despite Brazil being the largest market in Latin America.

The main mobile advertisers in Latin America are mobile content aggregators. “These players have a shared network agreement with the operator for content purchases or subscriptions by users,” says the executive.

Other investors participating in the mobile channel are advertising agencies, who allocate their clients’ advertising budgets. Campos Carlés says that “only this year have we begun to see a slightly larger commitment to the channel by the agencies, who are allocating a bit of their brands’ ad budgets to mobile. But it is still far behind the spending of mobile content aggregators.”

Coming in third are those investing in the distribution of applications. “Most come from global application distributors who also want to gain an audience in Latin America for their applications.”

For next year, the StartMeApp founder is betting on the “conversion” of both agencies and advertisers to mobile advertising. “The same thing happened 10 or 15 years ago, with digital advertising. We need to start showing successful case studies, as these are very important.”

“All marketing and advertising managers are talking about mobile. That’s what the buzz is about today—the need to have to have a presence, even if they don’t know how to do it or why. But it’s a huge opportunity for us,” says Campos Carlés.

When asked by Portada what advice he could give to advertisers interested in mobile advertising, Campos Carlés offered the following:

• First, think about who your mobile channel audience is. That’s the first tip. You first need to study the mobile audience you already have.
• The next point is to think about how to hold on to that audience, through which medium, and how to create audience engagement with the brand.

And the Winners are…!!! At #PORTADA13 – 7th Annual Hispanic Advertising and Media Conference 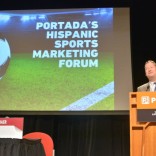